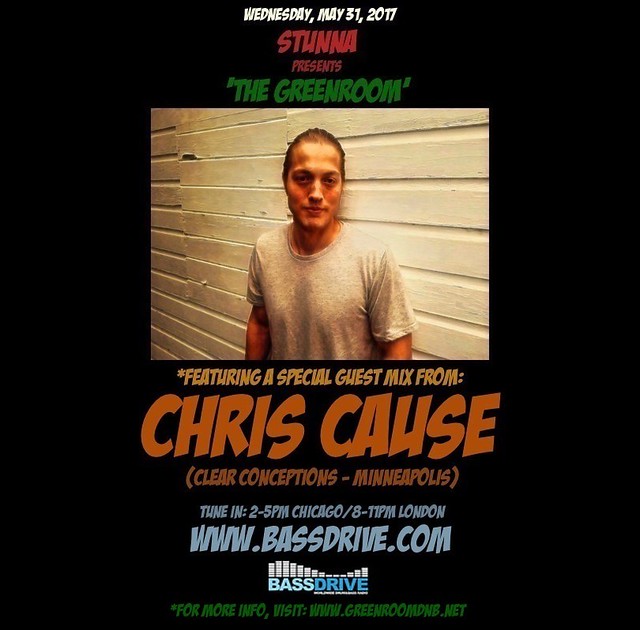 Closing out the month of MAY 2017, on WEDNESDAY the 31st, STUNNA presents yet another very special installment of 'THE GREENROOM' on BASSDRIVE Radio. In this week's program, we're graced by a guest mix from upcoming DJ and producer on the rise: CHRIS CAUSE.

Hailing from beautiful MINNEAPOLIS, MINNESOTA, CHRIS CAUSE began his DJ career after a college classmate introduced him to the sounds of DRUM+BASS music in 2007. He picked up his first pair of TECHNICS decks and got to work playing local club nights, raves, and eventually, performing on a regional level. A city rich in D+B history and culture, MINNEAPOLIS proved to be a great avenue for CHRIS to nurture his budding talent. In 2012, he began a residency at the 'RELOAD: MINNEAPOLIS' series of club events where he honed his DJ skills and gained a deeper understanding of dance floor dynamics. In this coveted role, he was able to meet international acts which, in turn, inspired him to start producing his own music.

After a run of successful DJ gigs, including a spot in the revered DJ competition at the 2014 edition of the SUN AND BASS festival in sunny SARDINIA, ITALY, 2016 saw CHRIS temporarily hang up his headphones and focus solely on production. After a year of hard work and late nights in the studio, CHRIS released his 'ENDGAME' EP in January. February 2017 saw him unleash two soulful, summertime LIQUID tracks in form of "SONAR" and "SAINT PAUL," which have both set the tone for his future sound. Currently, you can pick up a brand new release from CHRIS and fellow MINNEAPOLIS resident ECHTOO on their offering for NOTION's CLEAR CONCEPTIONS imprint. Now, more focused and determined than ever, CHRIS is returning to the DJ booth to bring his new, refined sound to the dance floor.

Join us this week as CHRIS CAUSE presents a guest mix featuring his own productions as well as some of his favorite tracks doing the rounds. Tune in!

**For more information on CHRIS CAUSE, visit: