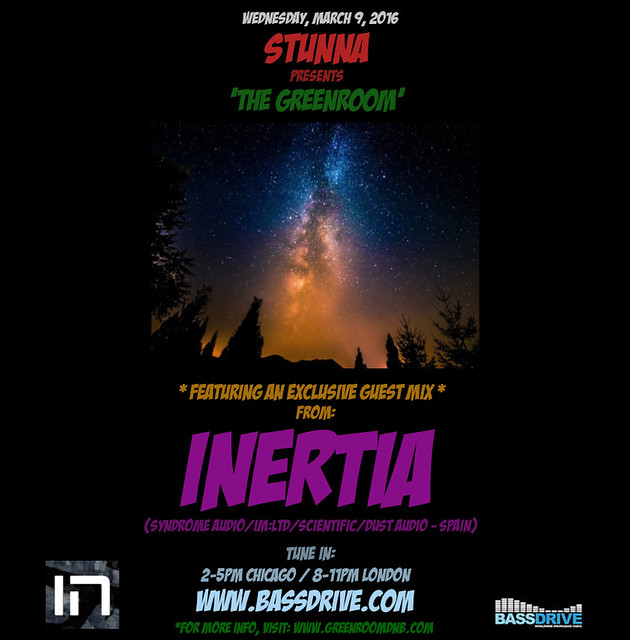 The cold Winter months are nearing an end and the rejuvenating vibes of Spring are most definitely on the horizon. On WEDNESDAY, MARCH 9, 2016, STUNNA presents another exclusive installment of 'THE GREENROOM' on BASSDRIVE Radio. In this week's edition, we're treated to a guest mix from the talented outfit known as INERTIA.

Hailing from the elegant metropolis of MADRID, SPAIN, the production trio known as INERTIA (aka FRAN, KIKE, and IVAN) joined forces after connecting their individual passions for DRUM+BASS music. Always refining their distinctive sound within the genre, the collective's vision to push boundaries, progress their productions, and cover new territories has kept their music fresh since their inception.

With releases spanning the past few years on revered labels such as SYNDROME AUDIO, IM:LTD, SCIENTIFIC RECORDS, FREE LOVE DIGI, PHUNKFICTION and DUST AUDIO, INERTIA has steadily attracted the attention of a wide array of D+B's tastemakers including LOXY, RESOUND, MAV, REZA, ARPXP, DAVE OWEN, HOMEMADE WEAPONS and FUTURE ENGINEERS to their output. With many new productions of their lush atmospherics and hard, driving beats in the works, INERTIA has a healthy release schedule lined up for the remainder of 2016 and beyond. Be on the lookout for plenty more studio pressure from this talented trifecta in the near future.

Join us this session as INERTIA presents a special mix and showcase their talents behind the decks. Tune in!!!

**For more information on INERTIA, visit: