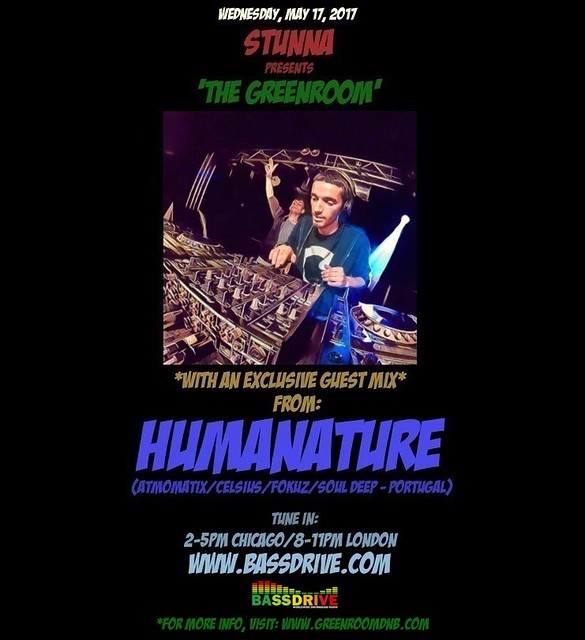 On WEDNESDAY, MAY 17, 2017, STUNNA presents a very special installment of 'THE GREENROOM' on BASSDRIVE Radio. In this week's program, we're treated to an exclusive guest mix from the talented producer and DJ known as HUMANATURE.

PORTUGUESE DRUM+BASS artist HUMANATURE (aka ANDRE SOARES) moved to the UNITED STATES with his parents at an early age. At the age of 18, he entered the music production arena, mainly influenced by the LIQUID FUNK D+B movement. In 2014, HUMANATURE moved to PORTO, returning to his native land to nurture his pursuit of a career in the DRUM+BASS world.

After a few years hard at work in the studio, and despite his young age, HUMANATURE has already accumulated an impressive number of releases under his belt. Notably included among these, a collaboration alongside fellow producers SKELETONE + SILENCE GROOVE, was released on 12" vinyl courtesy of the DUTCH-based FOKUZ RECORDINGS label. Continuing to work closely with the FOKUZ camp, HUMANATURE has inked more upcoming tracks to the revered imprint.

Besides performing live in the USA and PORTUGAL, HUMANATURE's talents have landed him shows in SPAIN, CZECH REPUBLIC and in the UK alongside artists such as MARCUS INTALEX, MAKOTO, LENZMAN, ETHERWOOD, SEBA, NAIBU, INSIDE INFO, BLU MAR TEH, GERRA + STONE, SKELETONE, SILENCE GROOVE, LIZ-E, DAVE OWEN, CALCULON, PIXEL, BASS BROTHERS and many others. His music has gained global support from the likes of DJ MARKY, LTJ BUKEM, INTELLIGENT MANNERS, TECHNIMATIC, to name just a few.

Join us this week as HUMANATURE drops a guest mix of some of his current favorite exclusive tracks doing the rounds. Tune in!!

**For more information on HUMANATURE, visit: