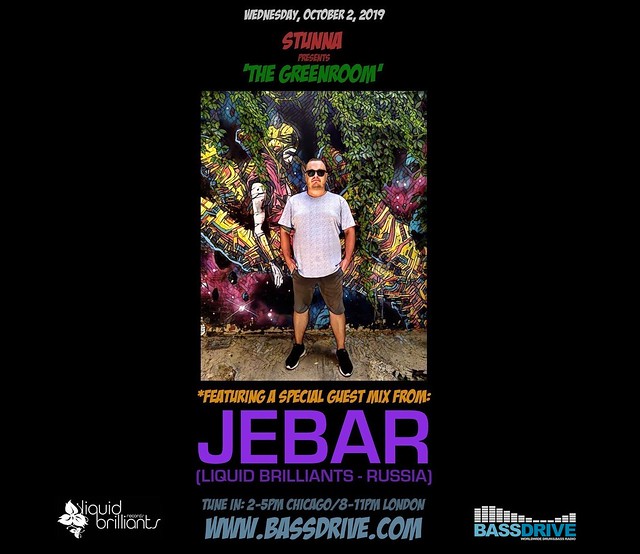 On WEDNESDAY, OCTOBER 2, 2019, STUNNA kicks off a brand new month of programs in 'THE GREENROOM' on BASSDRIVE Radio. In this week's session, we welcome the man behind the prolific LIQUID BRILLIANTS imprint for an exclusive guest mix. Label owner, producer and DJ JEBAR makes his 'GREENROOM' debut as we embrace the autumnal months ahead.

Hailing originally from CHELYABINSK, RUSSIA, DRUM+BASS artist JEBAR has made quite an impact on the global music scene in the past fifteen or so years. Following a string of successful vinyl releases for the likes of BLU SAPHIR, DEFUNKED, and SOUNDTRAX, JEBAR launched his LIQUID BRILLIANTS imprint in 2007 to much critical acclaim. Now, almost thirteen years into the game, LIQUID BRILLIANTS has published over 400 releases in its ever-growing catalogue of music. With a bevy of talented artists in its stable, such as COMMAND STRANGE, CONRAD SUBS, DAN GUIDANCE, dRamatic, GEETY, GREEKBOY, INTELLIGENT MANNERS, MAGE, mSdoS, SATL, SCHEMATIC, TREEX, and JEBAR himself, the end of 2019 into 2020 sees the LIQUID BRILLIANTS moving full speed ahead.

Join us this broadcast as JEBAR presents a special guest mix covering some of the LIQUID BRILLIANTS label's finest moments, as well as some of his personal favorites from the past few years. Tune in!


*For more information on LIQUID BRILLIANTS and JEBAR, visit: