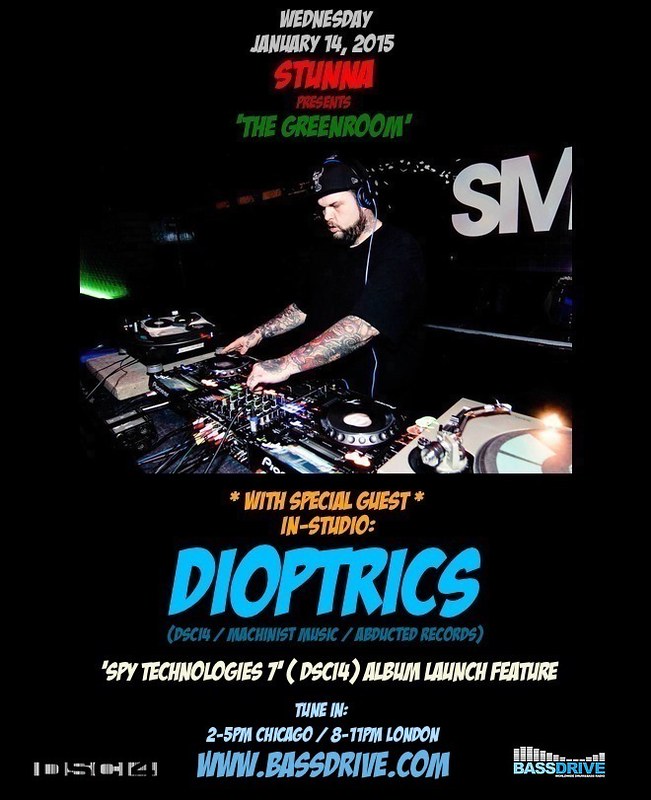 On WEDNESDAY, JANUARY 14, 2015, STUNNA presents another special edition of 'THE GREENROOM' on BASSDRIVE Radio. In this installment, he welcomes back to the studio, fellow CHICAGO resident, DJ, producer, and label manager: DIOPTRICS for an exclusive guest mix in support of the brand-new 'SPY TECHNOLOGIES 7' album dropping JANUARY 15th on the revered DSCI4 imprint.

After a very busy year in 2014 on the DJ circuit as well as behind the scenes in the studio, DIOPTRICS (aka DUSTIN GOLDEN) also juggled managerial duties for ABDUCTED RECORDS, MACHINIST MUSIC, DSCI4 (DJ TRACE has focused his attention on his 117 RECORDS label), and maintained a successful career as a tattoo artist. In 2015, be on the lookout for a number of high-profile musical endeavors from DIOPTRICS, including a track on the aforementioned 'SPY TECHNOLOGIES 7' compilation (also included: stellar offerings from the likes of LOXY, GREMLINZ, FADE, NOCTURNAL, AHMAD, LOGAM, ARMANNI REIGN, SOL. ID, TRISECTOR, SOUL INTENT, SURVEY, TANGO, LIGHTERMAN, RELEASE, and VERB).

Join us this session as we're treated to a special in-studio guest mix from DIOPTRICS in 'THE GREENROOM.' Tune in!!


**For more information on DIOPTRICS, visit: