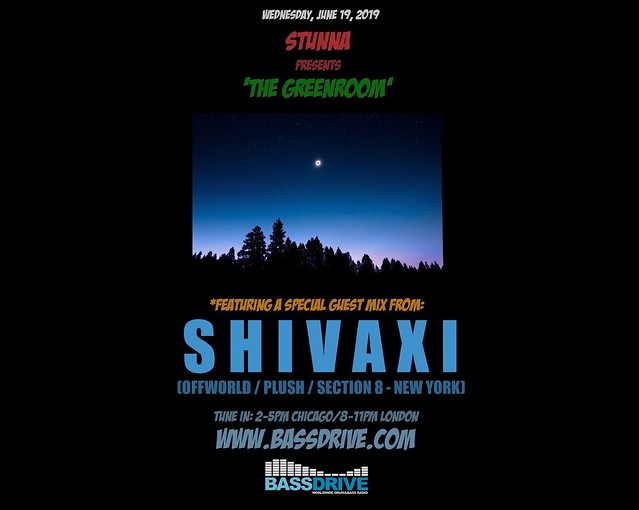 On WEDNESDAY, JUNE 19, 2019, STUNNA presents a special installment of 'THE GREENROOM' on BASSDRIVE radio. During this week's session, we're treated to an exclusive guest mix from producer and DJ on the rise SHIVAXI.

NEW YORK STATE native/FLORIDA-based artist SHIVAXI (aka ROMAN RHYSE-KLECANDA) began his journey into DRUM+BASS in 2005 after hearing the futuristic sounds of then-burgeoning trio NOISIA and has been hooked on the music, in all its various forms, ever since. Soon after this initial experience of hearing the fast-paced, energized electronic sounds of D+B, SHIVAXI embarked on a new mission to hone his craft as a DJ and, ultimately, as a producer of the music he loved. Fast forward a few years, and he has released quality tracks on celebrated imprints such as OFFWORLD RECORDINGS, PLUSH RECORDINGS, and SECTION 8 RECORDINGS. He's also found time to host his own 'BiPolar' radio program online courtesy of the DnBRadio station every Tuesday from 11am-1pm (Eastern time).

Join us this broadcast as SHIVAXI makes his debut appearance in 'THE GREENROOM' and presents a guest mix showcasing his own creations alongside some of his favorite selections, past and present, from around the globe. Tune in!

*For more info on SHIVAXI, visit: