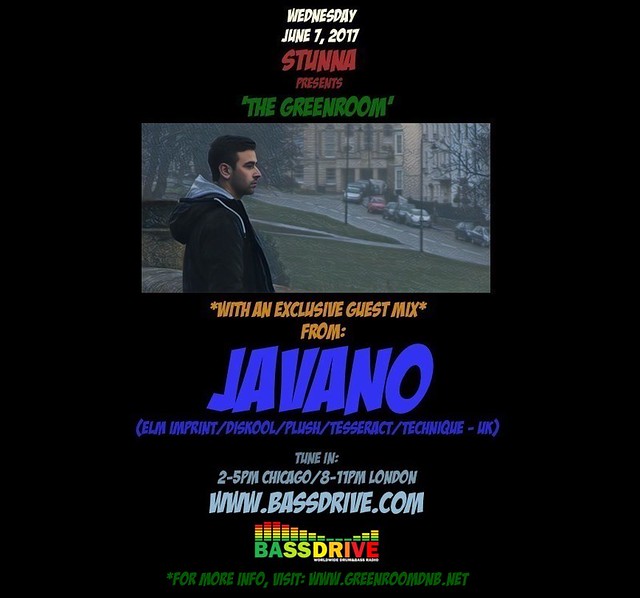 Kicking a brand new month of programs, on WEDNESDAY, JUNE 7th, STUNNA presents a very special edition of 'THE GREENROOM' on BASSDRIVE Radio. In this week's episode, we're treated to a guest mix from a relatively new artist on the scene who's been making quite a positive stir lately: JAVANO.

Hailing from LONDON, ENGLAND, JAVANO (aka JACK SUMARNO) has spent the past few years working diligently, refining his production sound of deep and soulful DRUM+BASS music. Drawing influences from TECHNO and an eclectic mix of various musical genres, JAVANO has created his own signature sound within and beyond the LIQUID FUNK umbrella.

Busy, as ever, in the studio domain, JAVANO has written a large amount of music that's gained support from the scene's top DJs, and has also garnered the interest of revered imprints. With tracks inked to labels such as ELM IMPRINT, DISKOOL, PLUSH RECORDINGS, TESSERACT, and TECHNIQUE RECORDINGS, the immediate future looks bright for JAVANO as he heads deeper into 2017 and beyond.

Join us this week as JAVANO presents a special guest mix exclusively for this week's edition of 'THE GREENROOM.' Tune in!

**For more information on JAVANO, visit: