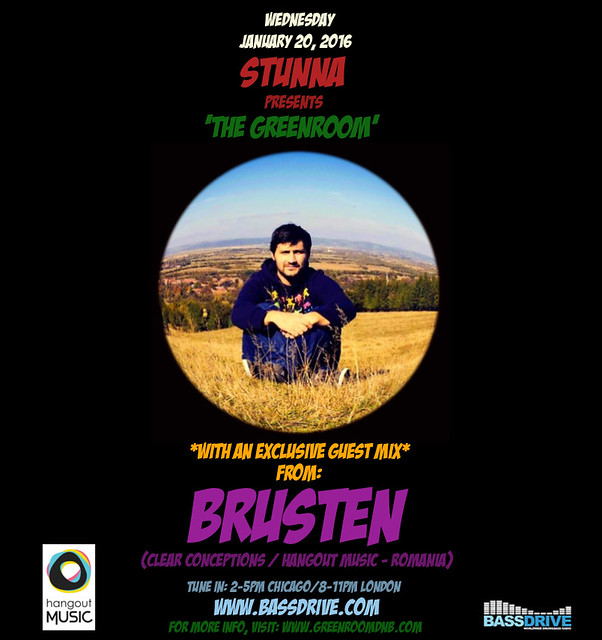 On WEDNESDAY, JANUARY 20, 2016, STUNNA presents the first guest mix episode of the year with a special edition of 'THE GREENROOM' on BASSDRIVE Radio. In this installment, we turn our attention to an artist we first encountered in the feature mix on ROMANIA and its producers episode back in 2013. In this week's show, we're treated to a new studio mix from the talented producer and DJ known as BRUSTEN.

Hailing form the capital city of BUCHAREST, ALEX BRUSTEN began his DRUM+BASS journey in 2008 as a resident of the COOLCAT CLUB along with his is associate SLIMY, and as a permanent resident DJ at events held at FABRICA and organized by the revered BASSWISE CREW. BRUSTEN's first musical productions surfaced in 2011 and have spanned a number of respected labels such as CLEAR CONCEPTIONS, DEEP ESCAPE MUSIC and FOLDSPACE RECORDS. His music has gained positive support on various online stations, as well as being featured on tastemakers AMOSS's 'CRANIUM SESSIONS.'

Currently, BRUSTEN has been busy curating the recently-launched HANGOUT MUSIC label based out of ROMANIA. He's an integral figure in the 'GREY DIVISION' collective of producers, and their 11-track debut digital compilation "THE EVENT HORIZON LP" will be followed this year with its first vinyl offering and more exciting productions from various artists in 2016 and beyond.

Join us as BRUSTEN graces the decks with a guest mix featuring exclusive tracks that span the deeper realms swirling around the 170 beats per minute territory. Tune in!!

**For more information on BRUSTEN, visit: