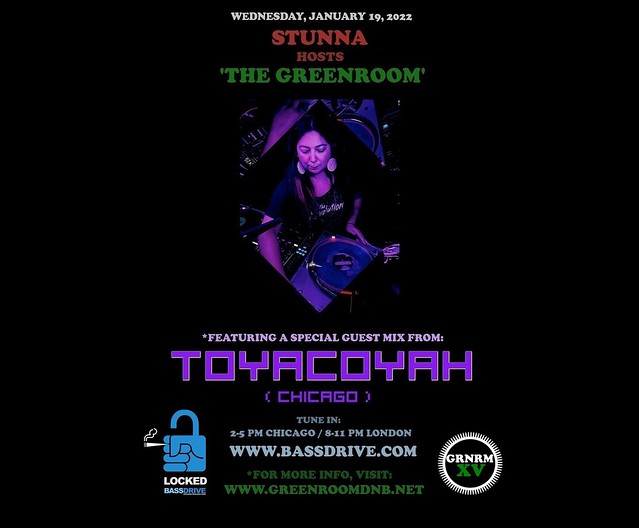 On WEDNESDAY, JANUARY 19th, STUNNA moves deeper into the month of broadcasts in 'THE GREENROOM' on BASSDRIVE Radio. This week's program sees the debut appearance of TOYACOYAH, as she graces the decks with an exclusive guest mix.

CHICAGO-based DJ TOYACOYAH is an avid record collector who starting her journey as a selector in the late '90s, hosting a DRUM+BASS radio show at the UNIVERSITY OF OKLAHOMA. After graduating, she moved to AUSTIN, TEXAS, where she continued pushing the D+B sound at raves and clubs throughout TEXAS, COLORADO, CALIFORNIA, and even internationally in BRAZIL. While in AUSTIN, she was one of the original resident DJs for MENTAL NOTE, a night dedicated to LIQUID FUNK and jazzy D+B at PLUSH nightclub. That seminal Tuesday weekly event went on to be one of the longest running DRUM+BASS nights in TEXAS, passing the torch on to others, like the SONAR DNB crew. After a brief hiatus due to motherhood, TOYACOYAH is back playing the music she loves for folks across the MIDWEST, and has recently joined up with the PROPER CHICAGO crew. She's grateful to have played alongside many of her favorite DJs (ANDY C, DRUMAGICK, FABIO, RANDOM MOVEMENT), and looks forward to what the future holds. Expect to hear all the fun flavors of bass music, including FOOTWORK, in DJ sets.

Join us this session as TOYACOYAH showcases her prowess behind the decks and unveils a special guest mix featuring some of her favorite tracks doing the global rounds. Tune in!

*For more info on TOYACOYAH, visit: