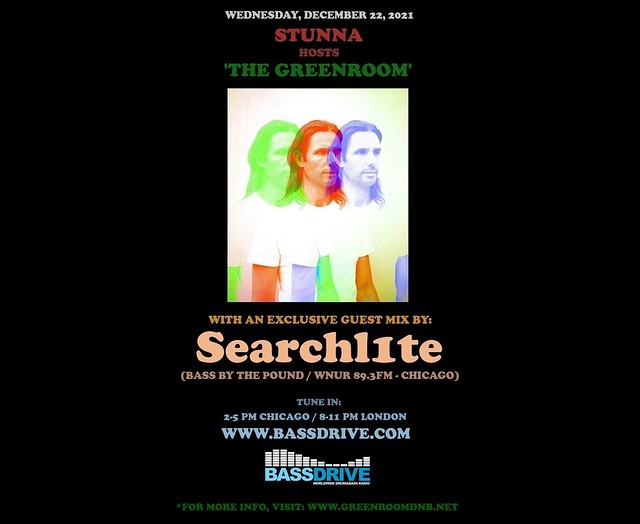 On WEDNESDAY, DECEMBER 22nd, STUNNA presents another special edition of 'THE GREENROOM' on BASSDRIVE Radio. During this week's broadcast, we're treated to an exclusive guest mix from talented, multi-facted artist Searchl1te, as he makes his debut on the program.

As a DJ, producer, radio show host, and designer of underground spaces, RYAN Searchl1te has been pushing forward JUNGLE aesthetics and rudeboy sensibilities for over two decades. His show on CHICAGO's legendary WNUR 89.3 FM, in collaboration with BASS BY THE POUND's weekly event 'THE SEMINAR,' showcased live mixes and interviews with regional, national, and international artists. He is known for adventurous selections, tight blends, and extended sets that connect as much to the dancefloor as to the stoner tuned in at home.

Join us this session of 'THE GREENROOM' as Searchl1te unveils a special guest set featuring some of his favorite tracks from around the globe. Tune in!

*For more info on Searchl1te, visit: