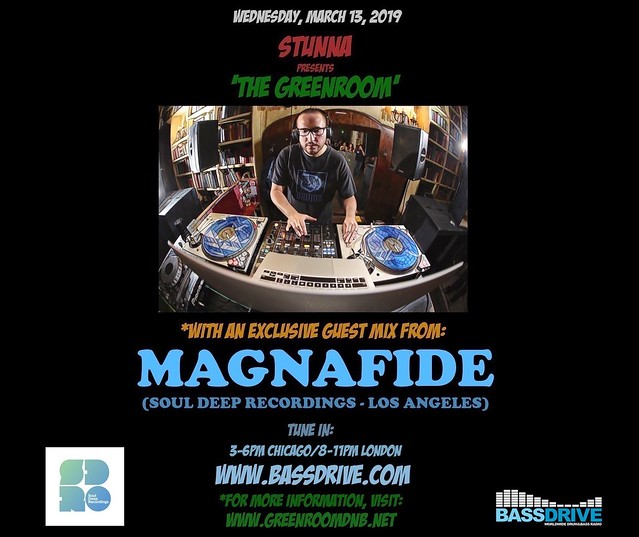 On WEDNESDAY, MARCH 13th, STUNNA presents another special edition of 'THE GREENROOM' BASSDRIVE radio. In this week's installment, we're treated to an exclusive guest mix from talented producer and DJ MAGNAFIDE, as he makes his debut on the program.

LOS ANGELES, CALIFORNIA-based artist MAGNAFIDE (CRIS CISNEROS) began learning about music composition and audio production in 1999. Upon hearing HIGH CONTRAST's seminal "TRUE COLOURS" album in 2002, he became deeply dedicated to his craft and has been producing mainly LIQUID FUNK DRUM+BASS music ever since. He's written for labels such as PEER PRESSURE, SOUL DEEP, STEPPING FORWARD, and TRUST AUDIO. His work has been featured on BBC Radio 1 by FABIO and has garnered global support from scene stalwart LTJ BUKEM. A huge fan of collaborating with other like-minded producers, MAGNAFIDE has teamed up and penned releases with the likes of COSMOLOGY, DUBSKY, GABRIEL HABIT, and ZERE. Founding member of L.A.'s FOURTH LEVEL COLLECTIVE, he also has a side D+B project with LIVING PROOF and TEAL, under the 'HOLISTIX' moniker.

APRIL 1, 2019 will see the release of his brand new 'HYDROTHERAPY' EP for the prestigious SOUL DEEP RECORDINGS imprint. Showcasing his prowess and acumen in the studio domain, the four track EP highlights MAGNAFIDE's diversity as a producer who combines beautiful, melodic hooks with sturdy, bass-laden beats aimed directly at the dance floor.

Join us this session as MAGNAFIDE dives deep into his bag for his favorite tracks doing the worldwide rounds and presents his inaugural guest mix for 'THE GREENROOM.' Tune in!


*For more information on MAGNAFIDE, visit: