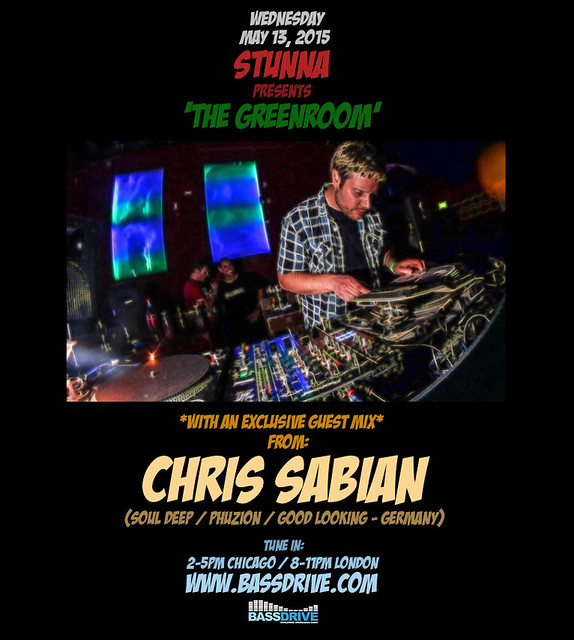 On MAY 13 2015, STUNNA returns for a very special edition of 'THE GREENROOM' on BASSDRIVE Radio. In this session, we're treated to an exclusive guest mix from an exciting, upcoming producer making waves across the LIQUID FUNK scene: CHRIS SABIAN.

Originally starting his DJ career within the BROKEN BEAT section of Electronic Music, GERMAN-based CHRIS SABIAN switched over to the DRUM+BASS world in 2003. Focusing on the deeper, more atmospheric side of the genre, the home base of MANNHEIM, GERMANY was where CHRIS enveloped himself within the driving pressure of the music. He gained experience DJing in MANNHEIM, around the surrounding cities, and ultimately became part of the acclaimed 'BAESSE.DE' family. In 2005, CHRIS began to really hone his craft as a producer and saw his first release courtesy of NOOKIE's PHUZION imprint.

Over the years, CHRIS has since seen releases and has forthcoming material on GOOD LOOKING, BLACK REFLECTIONS, SP BREAKZ, SONATA, SOUL BROS., LIQUID DROPS, and SOUL DEEP. With global support of his music from scene luminaries LTJ BUKEM, GROOVERIDER, BAILEY, CALIBRE, and his debut set in the UK penned in for this AUGUST, CHRIS SABIAN is definitely a name to watch in 2015 and beyond. Join us this program as we're treated to a guest mix from this rising artist. Tune in!!