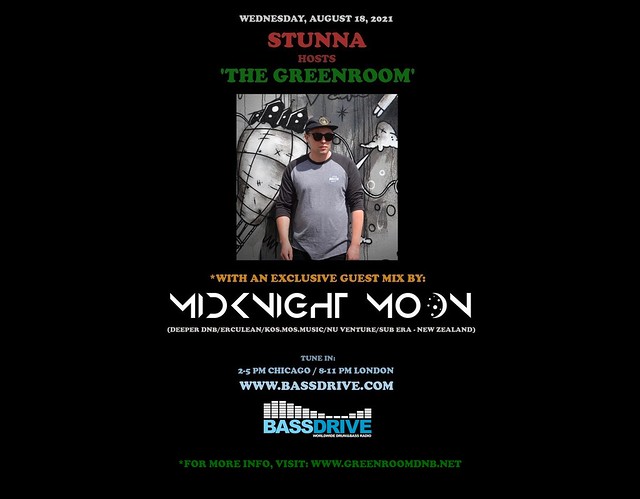 On WEDNESDAY, AUGUST 18th, STUNNA moves deeper into the month of programs in 'THE GREENROOM' on BASSDRIVE Radio. In this week's session, STUNNA welcomes versatile producer and DJ MidKnighT MooN to the show, as he delivers an exclusive guest mix during the broadcast.

NEW ZEALAND-based artist MidKnighT MooN (aka NICHOLAS OLIVER) originally began his path as a DJ at the age of 16, falling in love with performing and disovering new music. Always looking for something different to showcase, he dabbled between many different genres: originally starting off with HARD HOUSE, switching to BREAKBEAT, and then on to DRUM+BASS. He has supported many artists over the years including STANTON WARRIORS, MONRROE, SPECTRASOUL, FLUME, TC, JAKES, and also performed at NEW ZEALAND's largest new year's eve festival RHYTHM & VINES, where the likes of PENDULUM and MOBY performed.

MidKnighT MooN began making music four years ago after travelling through LONDON, and finally ended up in SWEDEN, where he had time to sit down and start the learning process in the studio domain. Although there have been many challenges, MidKnighT MooN has managed to gain momentum as a DRUM+BASS producer with a variety of current and upcoming releases on global labels such as NU VENTURE RECORDS, FOKUZ RECORDINGS, KOS.MOS.MUSIC, BOEY AUDIO, LIQUID FLAVOURS, DNBBrazil, SUB ERA, DEEPER DNB, and ERCULEAN.

Join us this installment as MidKnighT MooN delivers a special mix including his own productions alongside some of his favorite tracks doing the rounds worldwide. Tune in!