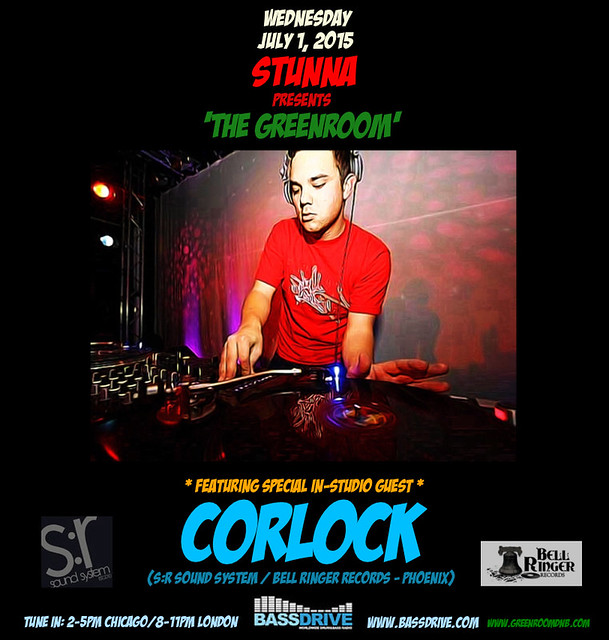 On WEDNESDAY, JULY 1, 2015, STUNNA kicks off the month with another special edition of 'THE GREENROOM' on BASSDRIVE Radio. In this session, we're treated to an exclusive, in-studio guest mix from a DJ direct from PHOENIX, ARIZONA: CORLOCK.

Getting his initial start in AKRON, OHIO as part of the INPUT crew in 1999, CORLOCK was involved with the longest running, multi-genre weekly playing BREAKS until relocating to PHOENIX in 2003. Quickly gaining momentum in a new scene, CORLOCK began playing DRUM+BASS exclusively and became a part of the PHX DnB crew. On a rotating basis, CORLOCK spun at the PHX DnB weekly party "ESSENTIAL WEDNESDAYS" in downtown PHOENIX for a few years. Gaining more bookings around the state of ARIZONA, as well as playing in various venues in CALIFORNIA, doors began opening for CORLOCK as a premier act.

In 2007, CORLOCK decided it was time to relocate again, and moved to LOS ANGELES to join forces with MC DINO and the URBAN ABORIGINEE crew. Performing in the L.A. area for over three years at numerous events and festivals, CORLOCK became an in-demand DJ that played for crews such as INSOMNIAC, UAontheDL, DnBTV, UPGRADE, JUNGLE THEORY, I LOVE LA, and RESPECT.

Deciding to redirect his focus mainly on education, CORLOCK gave the scene a rest for a few years while still accepting show offers when they arose. Currently, CORLOCK has reinvigorated his love for the music and tune production is underway. His passion for entertaining crowds and connecting with people through music can be seen and heard in his diverse DJ sets that continue to evolve and progress.

Join us this session as CORLOCK enters the friendly confines of 'THE GREENROOM' and presents an exclusive in-studio set. Tune in!!