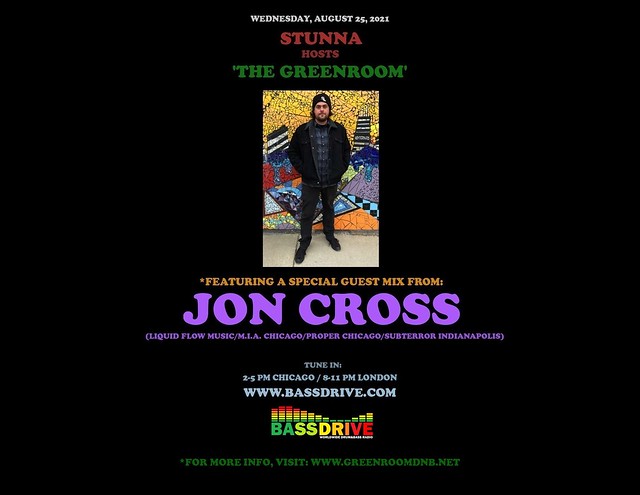 On WEDNESDAY, AUGUST 25th, STUNNA finishes off another action-packed month of broadcasts in 'THE GREENROOM' on BASSDRIVE Radio. In this week's session, we're treated to a return visit from seasoned DRUM+BASS DJ and producer on the rise JON CROSS, as he unveils a brand new studio mix during the program.

CHICAGO-based artist JON CROSS's selections represent the full spectrum of modern DRUM+BASS. His original tracks and club sets touch on a myriad of styles: from light and funky, to harder dancefloor flavors. With past and present affiliations including LIQUID FLOW MUSIC, PROPER CHICAGO, M.I.A. CHICAGO, and SUBTERROR INDIANAPOLIS, JON CROSS is indubitably an act to keep tabs on in 2021 and beyond.

Please join us this installment of 'THE GREENROOM' as JON CROSS delivers an exclusive guest mix featuring his own creations alongside some of his favorite tracks doing the rounds worldwide. Tune in!