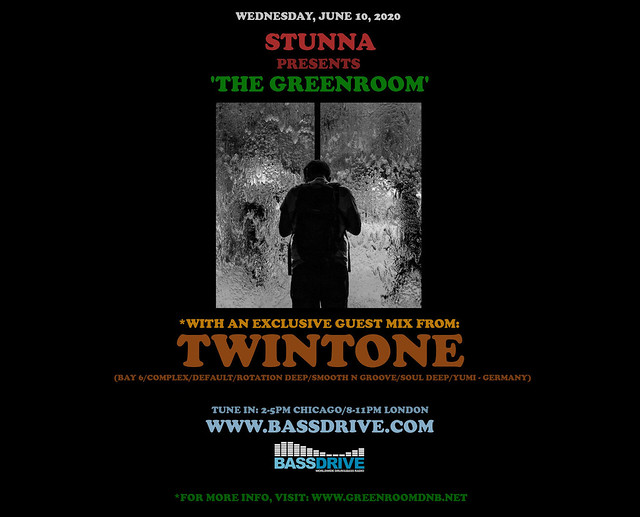 On WEDNESDAY, JUNE 10th, STUNNA presents another very special installment of 'THE GREENROOM' on BASSDRIVE radio. In this week's broadcast, we're treated to a guest mix from established producer and DJ TWINTONE, as he makes his debut appearance on the program.

TWINTONE (aka VOLKER THIEL) is a FRANKFURT, GERMANY-based DRUM+BASS music artist. In his formative days as a youth, he was exposed to the electronic sounds of KRAFTWERK, YELLOW MAGIC ORCHESTRA, RIYUCHI SAKAMTO, BRIAN ENO, as well as the intriguing sound of guitar bands. Although his musical influences stretch from CLASSICAL, LATIN JAZZ, SOUL, AMBIENT, to early HIP HOP, it's the vibe and atmosphere rather than the genre itself, that counts to the most to him in the end. His love of playing BOSSA on nylon string guitars has led him to visit BRAZIL countless times over the years. TWINTONE's fascination and love of various genres of music eventually led him into the fast-paced world of DRUM+BASS.

The new millennium saw the release of his debut single 'THE AMBUSH' b/w 'FEARLESS CALYPSO' on the revered FRANKFURT-based POSITION CHROME imprint manned by the legendary artist PANACEA. Due to the positive critical reaction of the single, the label commissioned an album from TWINTONE. The year 2000 saw the release of the "PARALLEL UNIVERSE" LP and CD. The success of the album project led to worldwide media coverage and success, including POSITION CHROME being awarded 'BEST FOREIGN DRUM AND BASS LABEL' by world renown KNOWLEDGE MAGAZINE. A sophomore album followed in 2001, in form of "THE WORLD DOMINATION ENTERPRISES." Championed by many, including the great BBC RADIO 1 host JOHN PEEL, the album furthered TWINTONE's global appearance as one of DRUM+BASS music's talents on the rise.

In the following two decades, TWINTONE has successfully released his signature sound on a wide range of cutting edge D+B labels including: BAY 6, BEAT SPECTRUM, BLU SAPHIR, COMPLEX, DNBBrazil, OFFWORLD, SHEER VELOCITY, SMOOTH N GROOVE, SOUL BROS, SOUL DEEP, and YUMI. JUNE 1, 2020 saw the release of TWINTONE's new "FRAGMENTS OF LOVE" EP on the ROTATION DEEP UK imprint. The six-track offering showcases TWINTONE's forward-thinking production techniques, as well as the talents of fellow producer SEATHASKY and vocalists ANASTASIA and JESS DONE. TWINTONE continues to move forward with his productions and releases, so be on the lookout for further releases in 2020 and beyond.

Join us for this very special edition of 'THE GREENROOM' as TWINTONE highlights his own music alongside some of his favorite tracks from around the world. Tune in!


*For more information on TWINTONE, visit: