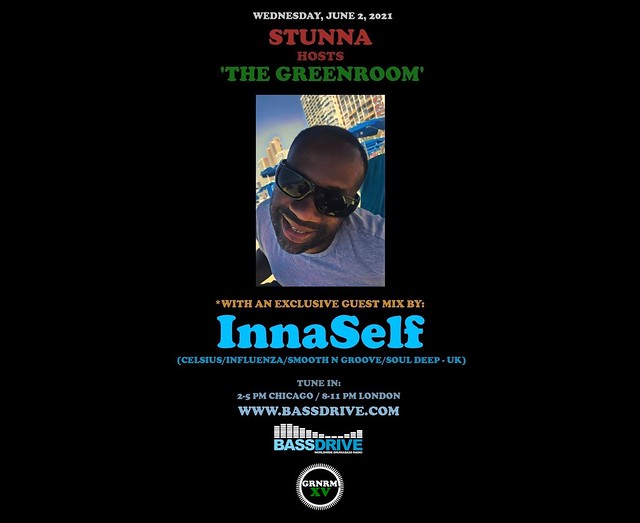 On WEDNESDAY, JUNE 2nd, STUNNA launches head first into a brand new month of programs in 'THE GREENROOM' on BASSDRIVE Radio. In this week's broadcast, we're treated to a return visit from one of DRUM+BASS music's finest producers, InnaSelf, as he presents a special guest mix crafted exclusively for this show.

WOLVERHAMPTON, UK'based producer and DJ InnaSelf (aka DUNCAN CORINALDI) discovered electronic music in the late '80s to early '90s as a teenager, listening to pirate radio. He began recording music and radio shows onto cassette tapes, which eventually lead to an obsession with buying vinyl. During the mid '90s, he was fortunate to own a small studio setup at home with gear based around an AKAI S950, ATARI ST and a MIDI keyboard. As the connection deepened within JUNGLE/DRUM+BASS music, DUNCAN progressively began to produce music of his own. In the year 2000, DUNCAN released his first recording on vinyl. The track was entitled "CORROSION" and was written under the THIRD ELEMENTS moniker (a collective consisting of DUNCAN, DJ NED RYDER (QUEST) and collaborator MATTHEW).

With global support of his music from the likes of RANDOM MOVEMENT, SCTOTT ALLEN, LM1, ROWPIECES, PHASE 2, TIM CANT, NELVER, DIFFERENT DRUMZ, LOGISTICS, and the BASSDRIVE Radio crew, InnaSelf continues to successfully moved forward with impeccable and memorable productions. His latest offering, the 'HIDE AWAY' EP on SMOOTH N GROOVE RECORDS is a stellar 4-track offering and lands MONDAY, MAY 31st worldwide in all fine digital retail outlets.

Please join us this session as InnaSelf unveils a brand new guest set featuring many of his new productions alongside some of his favorite tracks doing the rounds worldwide. Tune in!

*For more information on InnaSelf, visit: