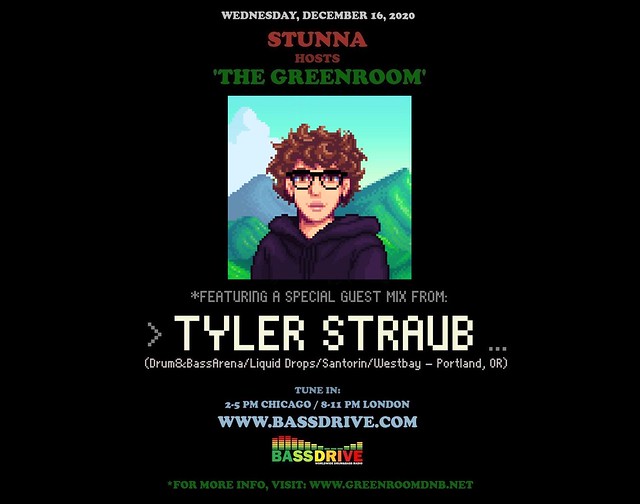 On WEDNESDAY, DECEMBER 16, 2020, STUNNA moves deeper into the month of broadcasts in 'THE GREENROOM' on BASSDRIVE Radio. In this week's session, we're treated to a special guest mix from multi-talented phenom TYLER STRAUB, as he makes his debut appearance on the program.

Originally from HAYWARD, CALIFORNIA, and now currently residing in PORTLAND, OREGON, TYLER has been surrounded with music for as long as he can remember. His journey into DRUM+BASS music began sometime around 2005, with his initial exposure to the internet radio station BASSDRIVE and its wide-reaching global community. The conglomeration of its IRC network of DJs, producers, labels, and listeners from around the world allowed TYLER to participate in the music scene before he could legally enter a club in the USA. Early D+B influences o his include the VIRGINIA-based production team STYLE CONTROL (WILL MILES, KJELL, ILL OMEN, NaCl), alongside collaborations with fellow BAY AREA producer METHOD ONE, and CHICAGO-based STUNNA. TYLER's music has seen releases over the years on labels such as DRUM AND BASS ARENA, LEVITATED, LIQUID DROPS, SANTORIN, and WESTBAY. Currently, you can find TYLER honing his multi-media skills on TWITCH.TV, where he's been building a channel focused around collaboration, performance, and education.

Join us this installment of 'THE GREENROOM' as TYLER STRAUB unveils a brand new guest mix created especially for this week's show. Tune in!