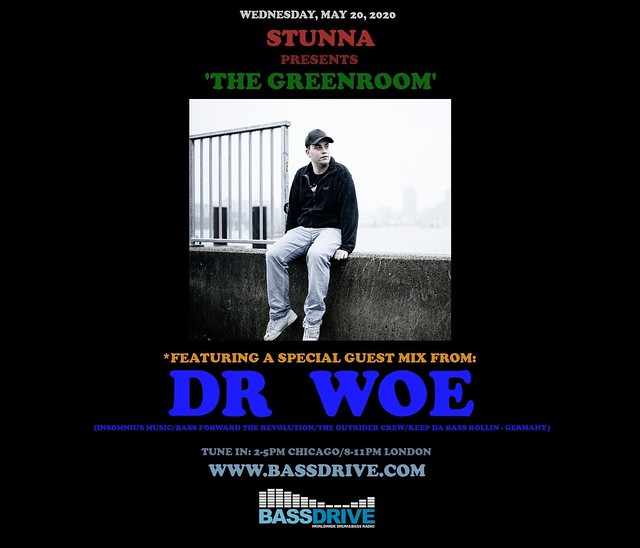 On WEDNESDAY, MAY 20th, STUNNA unveils another special installment of 'THE GREENROOM' on BASSDRIVE radio. This week's edition sees an exclusive guest mix from the talented DR WOE as he enters 'THE GREENROOM' for his inaugural visit.

BERLIN-born, and currently HAMBURG, GERMANY-based artist DR WOE began his electronic music production career from an early age. He's since expanded his DRUM+BASS engineering skills, culminating in the release of his debut 'THE INSOMNIUS' EP on the eponymous label he co-founded. Since 2004, as a DJ, DR WOE has gained attention and a following for his hard-driving, varied DRUM+BASS sets, taking listeners on a journey through rollers, deeper styles and sharper-edged NEUROFUNK. In his own mix series entitled 'THE ROLLING WOE SHOW,' for over a decade WOE has kept up listeners' heart rates through a diverse and genre-bending joyride each edition. 2018 saw the launch of both event and podcast series 'KEEP DA BASS ROLLIN,' featuring a wide breadth of global DRUM+BASS talent.

As a producer, DR WOE draws years of inspiration from the worlds of HIP HOP, TRIP and AMBIENT music and has produced both as a solo artist (as DR WOE, and also under the 'MOONSHYNA' pseudonym) and as one half of the 'SCARY WOODS' duo. Restless by nature, WOE has also found time to follow his graphic design endeavors as well as promote events with the OUTRIDER crew, and DJ as a resident member of the HAMBURG-based BASS FORWARD THE REVOLUTION crew.

Join us for this session of 'THE GREENROOM' as DR WOE presents a set crafted especially for the broadcast to showcase both his love of the music and talent behind the decks. Tune in!