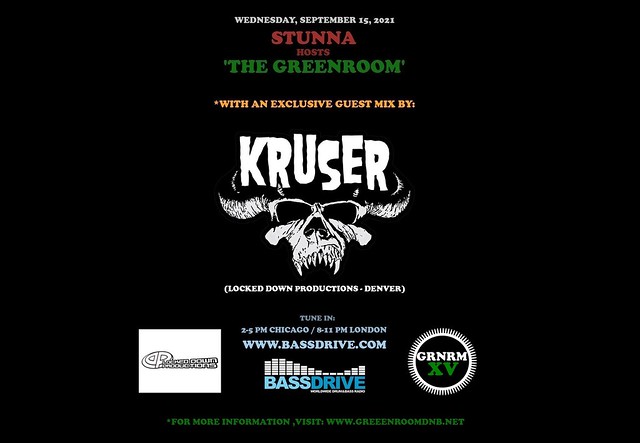 On WEDNESDAY, SEPTEMBER 15th, STUNNA moves forward thru the month of broadcasts in 'THE GREENROOM' on BASSDRIVE Radio. In this week's edition, seasoned and versatile selector KRUSER makes his debut appearance on the program, and delivers an exclusive guest mix crafted especially for this show.

Born and raised in GREEN BAY, WISCONSIN, KRUSER (aka JOSH KRUSE) started his DJ career in the year 2000, and by 2003, he'd formed the beloved LOCKED DOWN PRODUCTIONS. The production crew threw hundreds of events across the MIDWEST, with the bulk of shows being in KRUSER's home state, as well as a number of parties across the UNITED STATES. With a focus on DRUM+BASS music, KRUSER's sets have a wide range of multiple genres from being a true music enthusiast and a willingness to surprise attendees occasionally. It wasn’t until his move to MILWAUKEE that his events and DJ bookings really gained momentum, as he shared stages with PENDULUM LIVE, EL HORNET, RONI SIZE, ANDY C, GOLDIE, APHRODITE, DATSIK, and hosted the likes of Q PROJECT, JOHN B, DJ TRACE, LOXY, INK, KLUTE, A-SIDES, RAIDEN, SINISTARR, GRIDLOK, and OPTIV.

KRUSER moved to DENVER, COLORADO in 2014 to pursue his career as a restaurateur and to challenge himself personally as he put his DJ and promoter career aside to focus more on the hospitality industry. With the COVID-19 shutdown, he was able to refocus on music and really catch the bug of wanting to dive back into everything he truly loved.

Please join us this installment as KRUSER showcases his prowess behind the decks with a special extended guest mix during the show. Tune in!

**For more information on KRUSER, visit: