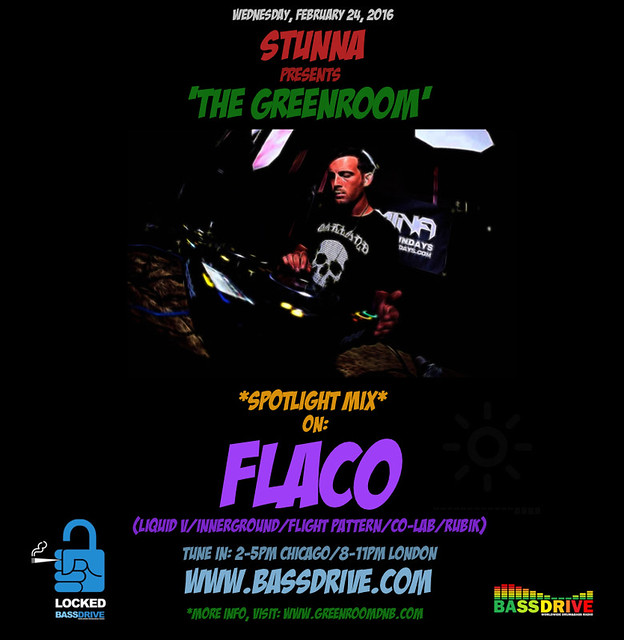 A gifted young engineer of an array of different electronic styles and genres, FLACO (aka ADRIEN SMADBECK) has honed his craft of making deep, melodic and hypnotic rollers over the past few years and become one of the elite members of producers in the fast-paced world of DRUM+BASS music. Originally based in GAINESVILLE, FLORIDA, FLACO has recently staked his camp in the thriving, creative center known as the 'BAY AREA' of OAKLAND/SAN FRANCISCO in northern CALIFORNIA. A resident of the revered 'STAMINA' SUNDAYS crew (which brings together both local talent and international acts on a weekly basis free of charge to the F8 club at 1192 FOLSOM in SAN FRANCISCO), FLACO (alongside fellow residents JAMAL, SUBMORPHICS, METHOD ONE, GRIDLOK and ADEPT) showcases his latest productions to the masses week in/week out.

With an impeccable catalogue of original tracks, collaborations and remixes signed to labels such as LIQUID V, INNERGROUND, GOOD LOOKING, FLIGHT PATTERN, CO-LAB, ALL STREET, DISKOOL, DRIVEN AM, IM:LTD, INFLUENZA, SOUNDTRAX, PRESTIGE, POINT AUDIO, SHEER VELOCITY, VIBRATION, and RUBIK, FLACO continues to move forward in 2016 with a slew of fresh new music, an exciting collaborative excursion known as 'SYCAMORE' (with seasoned production veterans TYLER STRAUB and GLEN E STON), and a calendar filled with live shows at clubs around the globe.

Join us this session of 'THE GREENROOM' as STUNNA dedicates 3 full hours to the music of FLACO and sheds a bit more light on one of DRUM+BASS music's most consistent talents. Tune in!!


*For more information on FLACO, visit: