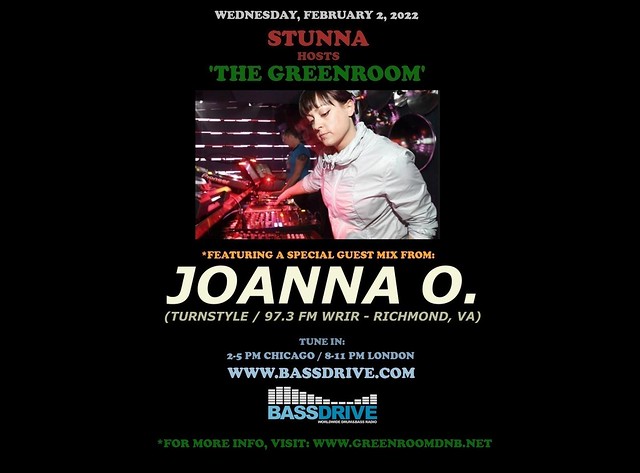 On WEDNESDAY, FEBRUARY 2nd, STUNNA kicks off a brand new month of broadcasts in 'THE GREENROOM' BASSDRIVE radio. In this week's session, STUNNA welcomes veteran DJ and tastemaker JOANNA O. to the program, as she presents her debut guest mix on the show.

JOANNA O. has been playing records for underground dance music enthusiasts since 1998. Her record store, TURNSTYLE, served up the fresh underground musical selections in downtown RICHMOND, VIRGINA from 2003 to 2016. You can still hear her live on SATURDAY nights on her FM radio show 'FREQUENCY' (which launched in 2005) on WRIR 97.3FM from 9-11pm EST, and at various events in RVA and beyond. Her fine track selection and hard-earned mixing skills have landed her slots alongside many notable dance music greats over the last two decades. She has shared the stage with prolific DRUM+BASS artists such as LTJ BUKEM, LENZMAN, FURNEY, DJ MARKY, ARTIFICIAL INTELLIGENCE, THE INSIDERS, RANDOM MOVEMENT, and STUNNA, to name a few. JOANNA O. consistemtly brings the vibes behind the decks, where she is known for her smooth and sweet D+B sounds.

Join us this session as JOANNA O. presents a special extended guest mix featuring some of her favorite tracks doing the global rounds. Tune in!