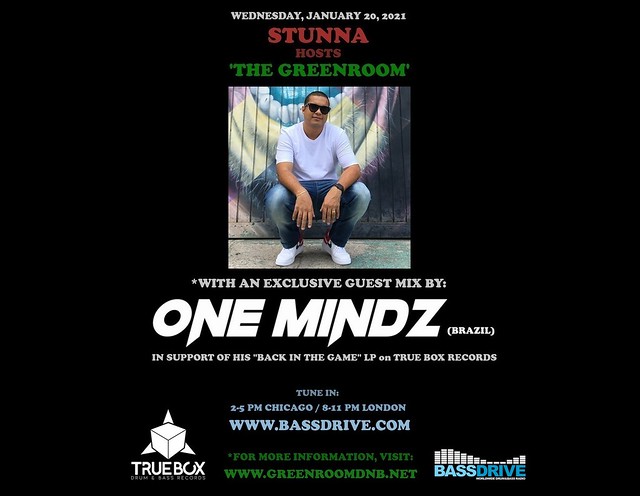 On WEDNESDAY, JANUARY 20th, STUNNA moves deeper into the month with another special edition of 'THE GREENROOM' on BASSDRIVE Radio. In this week's installment, burgeoning producer and DJ ONE MINDZ delivers an exclusive guest mix in support of his debut album which lands FRIDAY the 22nd.

SAO PAULO, BRAZIL-based DRUM AND BASS artist ONE MINDZ (aka CARLOS O. SILVA) had his first contact with underground music in mid 1994. Influenced by his older brother who was a DJ, ONE MINDZ began his career in the world of electronic music. In 2002, his first DJ mixes appeared, and after a long period of honing his craft behind the decks, the year 2017 saw ONE MINDZ enter the production ring with initial releases on the SOULBASS RECORDINGS imprint. After a number of subsequent offerings the past four years, JANUARY 22, 2021 sees the fruits of ONE MINDZ's musical labor of love with the unveiling of his debut 'BACK IN THE GAME' LP courtesy of TRUE BOX RECORDS. An action-packed album aimed directly at the dancefloor, 'BACK IN THE GAME' is a solid snapshot of the versatile production techniques ONE MINDZ has developed over the years.

Please join us for this special session of 'THE GREENROOM' as ONE MINDZ delivers a guest mix featuring many cuts from his debut album, exclusives, and some of his favorite tracks doing the global rounds. Tune in!

*For more information on ONE MINDZ, visit: