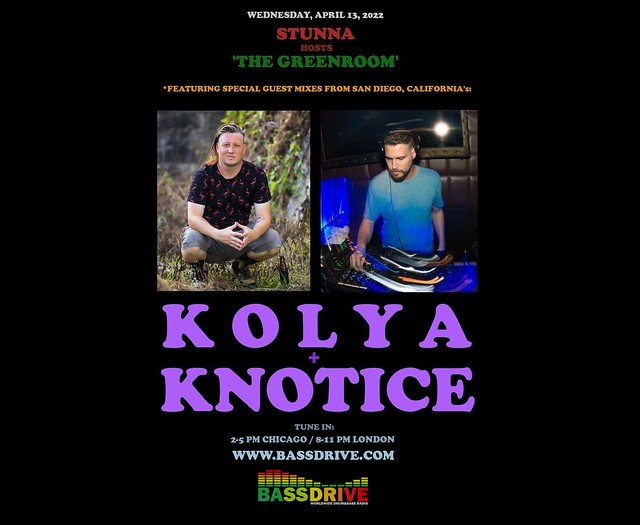 On WEDNESDAY, APRIl 13th, STUNNA hosts another very special installmenet of 'THE GREENROOM' on BASSDRIVE radio. During this week's program, we set our sights upon beautiful SAN DIEGO, CALIFORNIA, as two of the city's top talents, KOLYA and KNOTICE, deliver guest mixes for the show.

KOLYA (aka NIK) has been making music and DJing for decades. You might know him from his collaborations with STUNNA ('LAWS OF MOTION,' 'DIME PIECE,' 'SUGAR BEAR') or previous guest mixes for 'THE GREEENROOM' under his old alias CALCULON. He is the founder of the globally lauded SHOOT RECORDINGS imprint. A label featuring a wide breadth of tempos and artists such as OM UNIT, DIGITAL, SKEPTICAL, SURVIVAL , DJ MADD, ROOT FOR THE VILLAIN, SINISTARR, DEFT, MORESOUNDS, LEWIS JAMES, and many more, 2022 marks the ten year annivesary of SHOOT RECORDINGS in business.

KNOTICE is an advocate of deep, eclectic dance grooves, and an atmospheric, often grimey bass flow to make you move. in the late 1990s, KNOTICE (aka ASH) started out performing as a resident DJ for an INDUSTRIAL club in MICHIGAN. Using this experience soon opened the doors to the underground where he found his calling. He would then move on to DJing at after hours and main events in CHICAGO and surrounding areas. It was in the late 2000s when he reimagined himself as 'KNOTICE.' A name that represents knowlege (know this), mastery, awareness and representative of a command to notice. With this mindset and focus, he is never afraid to experiment or break the mold. His often eclectic selection is all reflections of his current frame of mind. You might find him during his mixes where he delineates and brews together beautiful synth melodies, grimey backdrops, funky breaks, brooding basslines, and occasional vocal hooks, all to keep you stepping. If you're in the CHICAGO area this THURSDAY, APRIL 14th, catch KNOTICE as he graces the decks at the 'PROPER' DRUM+BASS weekly held at DEBONAIR SOCIAL CLUB (1575 N MILWAUKEE AVE).

Please join as STUNNA welcomes sunny SAN DIEGO selectors KOLYA and KNOTICE to the broadcast as they each unveil mixes created especially for this program. Tune in!

*For more information on KOLYA, visit:


**For more information on KNOTICE, visit: