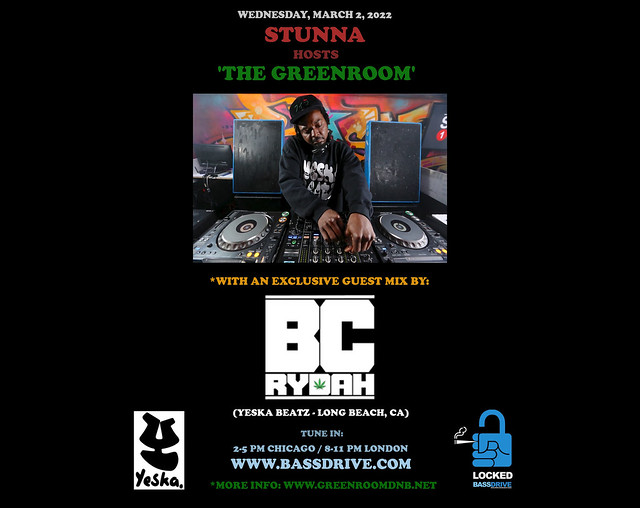 On WEDNESDAY, MARCH 2nd, STUNNA luanches into a new month of broadcasts of 'THE GREENROOM' on BASSDRIVE radio. In this week's session, we're treated to an exclusive guest mix from burgoening producer and DJ BC RYDAH, as he makes his debut appearance on the show.

BC RYDAH is a JUNGLE DJ, Producer, remixer from LONG BEACH, CALIFORNIA. During his career as a DJ, he's shared the stage with the likes of FRANKIE BONES, R.A.W. aka 6BLOCC, DIESELBOY, JON1ST, APX-1, CRS?, SINISTARR, SIXFOOTUNDA, JASON BLAKEMORE, DJ STARSCREAM, U-OME, OSCAR DA GROUCH, E-SASSIN, RON D CORE, JACKY MURDA, OSCI, MRS. MAGOO, DJ BABEL, M27, NINJA FAREYE, and MIZEYESIS, to name a few. BC RYDAH has also been running the JUNGLE music label YESKA BEATZ UNLIMITED since 2014, and its sister label, YELLOW JACKET RECORDINGS, since 2018. With multiple releases on further labels such as RUFF GUIDANCE, SOUND SO FIRECE, and WICKED JUNGLE, as well as countless singles on independent labels across the globe, expect to hear more excitiing music from BC RYDAH in 2022 and beyond.

In support of the newly-released 'RUFF N RUGGED VOLUME 3' various artist compilation on the YESKA label, tune in this week as BC RYDAH presents a special guest set featuring some of his favorite tracks doing the rounds worldwide.

*For more information on BC RYDAH, visit: