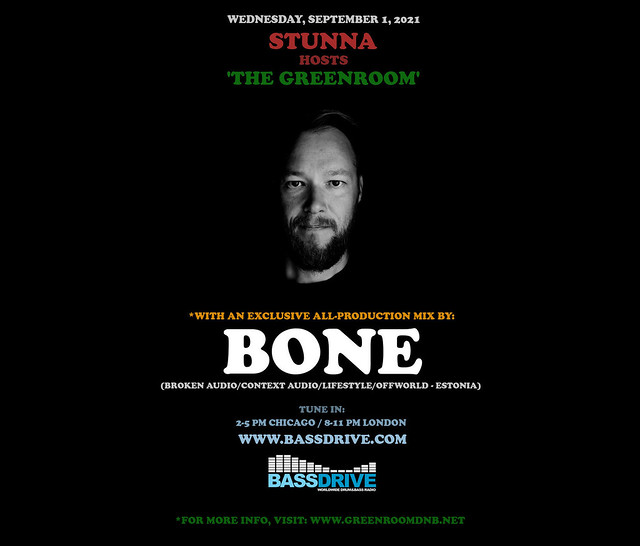 On WEDNESDAY, SEPTEMBER 1st, STUNNA dives into a brand new month of broadcasts in 'THE GREENROOM' on BASSDRIVE Radio. During this week's installment, we're treated to an all-production guest mix from prolific DRUM+BASS producer BONE, as he makes his debut appearance on the program.

TALLINN, ESTONIA-based producer/DJ BONE (aka MAREK RATASSEPP) began his exploration into music production in the early 2000s, and since then, he has slowly but surely covered the vast spectrum of DRUM+BASS music's many subgenres. In 2012, a decade's worth of work in the studio and behind the decks paid off, and he won ‘BEST NEWCOMER' at THE annual DRUM+BASS awards gala run by ESTONIAN NATIONAL RADIO. Over the yeas, BONE's unique and varied tunes have been released by a myriad of revered labels such as BROKEN AUDIO RECORDINGS, CONTEXT AUDIO, LIFESTYLE MUSIC, and OFFWORLD RECORDINGS.

Join us this session as BONE presents a special guest set spotlighting his hard work in the studio domain with an exclusive, all-production mix. Tune in!

**For more information on BONE, visit: