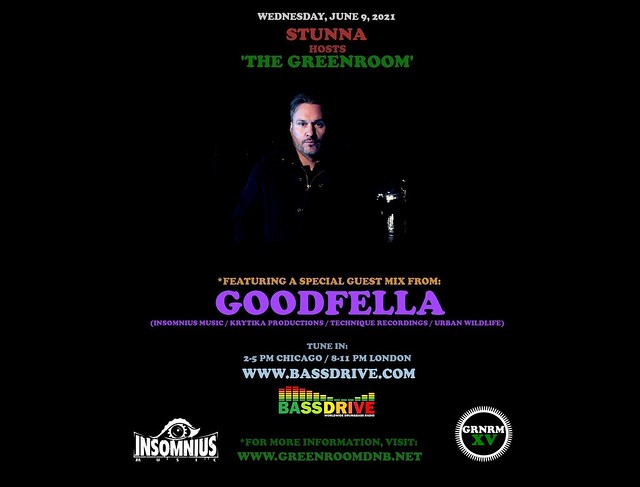 On WEDNESDAY, JUNE 9th, STUNNA hosts another special edition of 'THE GREENROOM' on BASSDRIVE Radio. In this week's installment, veteran DJ and producer GOODFELLA makes his debut on the program and delivers an exclusive guest mix during the broadcast.

HAMBURG, GERMANY-based artist GOODFELLA began his career in the DRUM+BASS music scene in 1993. Initially a key figure in organizing successul events at venues such as MOLOTOV, PHONODROME, POWERHOUSE, and ROTE FLORA, GOODFELLA also established the revered HAFENSTRAßE event series. Since 2005, he has graced the airwaves every third Friday of the month with 'ELECTONIC JAM' on local-based FSK RADIO, and is also a resident DJ and talent booker at StrandPauli.

A versatile producer of many different musical genres, GOODFELLA has released on DRUM+BASS labels such as: TECHNIQUE RECORDINGS, KRYTIKA PRODUCTIONS, and URBAN WILDLIFE. His most recent offering, in form of the tracks "SENSEI" and "CHASER", was released last month courtesy of the INSOMNIUS MUSIC imprint. This pair of deep and dark slices of future funk are making waves this summer in DJ boxes around the globe and highlights GOODFELLA's talent in the studio domain.

Join us this session as GOODFELLA showcases his acumen and long-time experience behind the decks, as he drops a guest set crafted especially for this show. Tune in!

*For more info on GOODFELLA, visit: