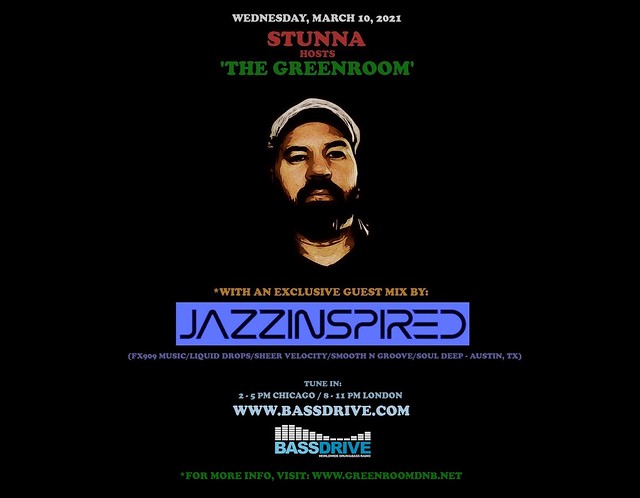 On WEDNESDAY, MARCH 10th, STUNNA hosts another special session of 'THE GREENROOM' on BASSDRIVE Radio. In this week's broadcast, we're treated to a return appearance from burgeoning producer and DJ JazzInspired, as he presents an exclusive guest mix created specifically for this program.

Originally from HOUSTON, TEXAS (now residing in AUSTIN), rising DRUM+BASS talent JazzInspired's life was forever changed when he was introduced to the underground warehouse scene in the early '90s. He started DJing and eventually started playing at local clubs and venues. In 1999, DJ SOULTRAIN (JazzInspired’s moniker at the time), played the biggest party HOUSTON had ever seen. The year 2000 saw JazzInspired begin to produce music under yet another name: DazRight. Although nothing came about of it, during this same period, he ran into LTJ BUKEM before his show in HOUSTON and handed him a demo. BUKEM replied to JazzInspired through AOL instant messenger, sending words of encouragement to 'keep producing but the music wasn’t a good fit for his label quite yet.' Unfortunately, life and its many trappings took a toll, and JazzInspired had to give up what he loved for over a decade.

Fast forward to 2019, and his love of the music was too strong to allow all the time and effort to fade away. JazzInspired got back on the grind, and in a short amount of time, he was able to establish himself as an artist, again. JazzInspired brings to the world, music that has influences of JAZZ, SOUL, JUNGLE, DUB, and many other eclectic mixes of sounds and genres. He's solidly established himself as a LIQUID FUNK producer on revered labels such as DNBBrazil, FX909 MUSIC, LIQUID BRILLIANTS, LIQUID DROPS, LIQUID FLAVOURS, MIDNIGHT SUN, SHEER VELOCITY, SMOOTH N GROOVE, SOUL DEEP, and TRIBE OF DUB. Expect big thing from this artist as his journey has only begun!

Join us for this edition of 'THE GREENROOM' as JazzInspired returns to the show and unveils an exclusive guest mix featuring some his favorite tracks doing the global rounds. Tune in!


*For more information on JazzInspired, visit: