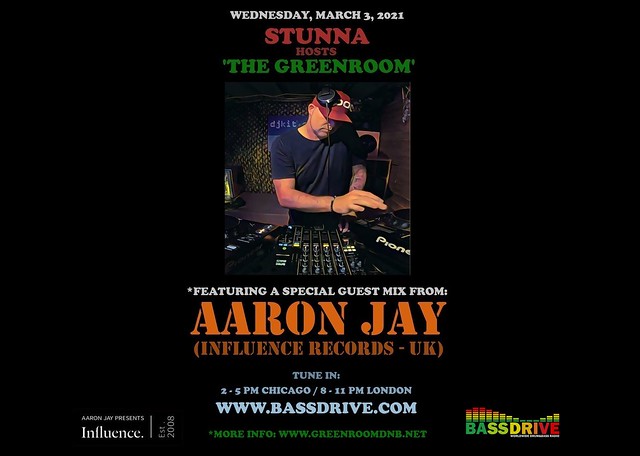 On WEDNESDAY, MARCH 3rd, STUNNA kicks off a brand new month of programs in 'THE GREENROOM' on BASSDRIVE Radio. In this week's edition, STUNNA welcomes back seasoned DJ, producer, and INFLUENCE RECORDS' label founder AARON JAY, as he unveils a brand new studio mix crafted especially for this session.

Born in LONDON, UK, AARON JAY first discovered the sounds of JUNGLE in the mid '90s, attending raves as a teenager which led him to the burgeoning sounds of GOLDIE and his seminal METALHEADZ imprint. From there, AARON got the bug for DJing, finding his first residencies whilst at university. This led him to become a recognized DJ, pioneering the early LIQUID FUNK sound in northern cities, landing a university radio show sponsored by BBC Radio 1. He retuned back to LONDON after his studies, and began making a name for himself by playing at ONE NATION, HOSPITALITY, and also performing as a regular warm-up DJ at BRYAN G’s popular 'MOVEMENT' night.

Shortly after this, AARON was contacted by GROOVE CONNECTION, the legendary DJ agency who looked after FABIO and GROOVERIDER, and were responsible for running FABIO’s legendary 'SWERVE' events. After just three gigs at 'SWERVE,' AARON was tapped as FABIO’s main resident DJ. The following seven years, AARON toured with 'SWERVE,' showcasing his talents behind the decks at FABRIC, CABLE CLUB, and many more legendary venues. During these years, AARON would find himself receiving unreleased material from then-upcoming producers, including PAUL T and EDWARD OBERON, LYNX, DATA, SINISTARR, SOUL INTENT, and countless others. As a result of this influx of unsigned DRUM+BASS tracks he had access to, AARON decided to create his own label, and established INFLUENCE RECORDS in 2008.

Since the imprint's initial inception and launch, AARON, alongside label manager J:SKEPTIK, have guided INFLUENCE RECORDS' path in constucting a deep and varied discogrpahy of strong material from the likes of COMMIX, ZERO T, BUNGLE, CUTWORX, EASY and GEEKS, ATOM, FLACO, CONRAD SUBS, FURNEY, SEVIN, MR JOSEPH, EVESON, DAVE OWEN, and many more talented artists. The label represents the deeper and sometime leftfield side of the DRUM+BASS genre. With 2021 already off to a solid start with releases from CONRAD SUBS and WAGZ, this year will also see the launch of INFLUENCE RECORDS' first-ever artist album from EASY, as well as a various artist compilation entitled "DIARIES FROM DETROIT CITY" (with offerings from LYNX, SEBA, BUNGLE and more exciting producers).

Please join us for this special installment as AARON JAY presents an upfront guest mix featuring many exclusive tracks from the INFLUENCE RECORDS label camp. Tune in!

*For more information on AARON JAY and INFLUENCE RECORDS, visit: