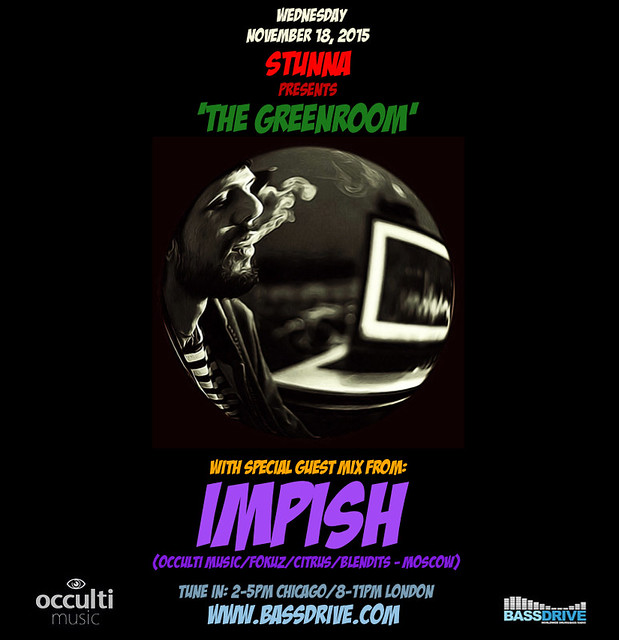 On WEDNESDAY, NOVEMBER 18, 2015, STUNNA dives deeper into autumn with yet another exclusive installment of 'THE GREENROOM' on BASSDRIVE Radio. In this week's edition, we welcome the return of producer (and GREENROOM favorite) IMPISH and are treated to a special guest mix.

Since we last caught up with IMPISH in 2014, the budding producer, DJ, and promoter has gone strength to strength, releasing a handful of solo tracks, collaborations and remixes on various high-profile DRUM+BASS labels. He's played an integral role in the success of the MOSCOW, RUSSIA-based 'BURNING SERIES' music events and is gearing up for their annual birthday celebration this coming DECEMBER 26th. IMPISH has been busy curating the revered OCCULTI MUSIC imprint which is set to unveil its next vinyl release on NOVEMBER 30th in form of a massive remix from RANDOM MOVEMENT of MALAKY, SATL, and SKELETONE's "FUTURE BLUES," paired with an offering from newest OCCULTI artist VALENTIN aka CHRIS HARMONICS.

Lock in this week as IMPISH showcases his prowess behind the decks and gives us a peek into what tracks have been doing the rounds in his live sets currently. Tune in!!!