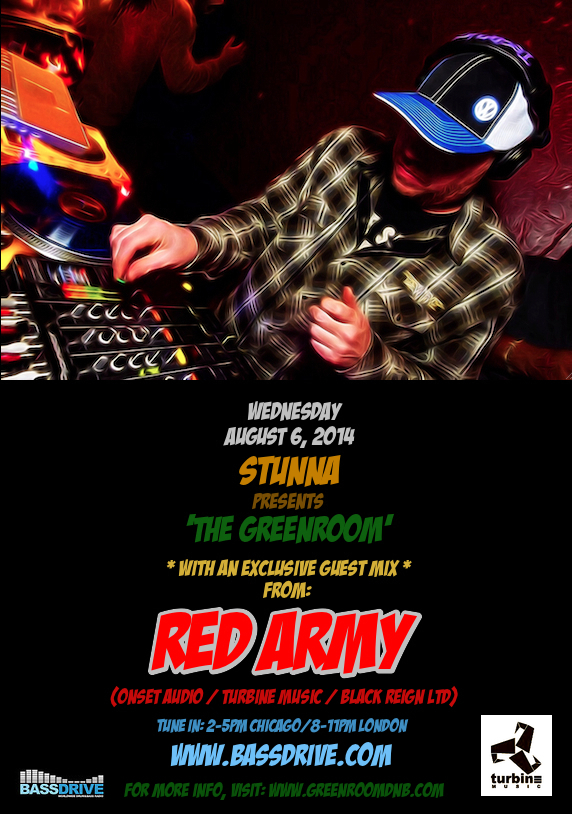 On WEDNESDAY, AUGUST 6, 2014, STUNNA kicks off the month with another very special installment of 'THE GREENROOM' on BASSDRIVE radio. For this edition, we point our compass towards the WEST COAST of the UNITED STATES and find the multi-talented, SACRAMENTO, CALIFORNIA-based DRUM+BASS producer known as RED ARMY.

In the mid 1990's, RED ARMY (aka JAMES FUHRING), rocked audiences in seminal PUNK/HARDCORE bands MOHINDER and JENNY PICCOLO. It was during the latter that he accidentally discovered the sound of DRUM+BASS while in BERLIN, GERMANY on a EUROPEAN tour. JAMES was so blown away by this sound, he shortly sold all of his music equipment to buy a sampler, turntables and a mixer. The first two years were rough as he knew no one involved in D+B, only a local SANTA CRUZ radio show called 'THE METALLIC BLURP,' hosted by the ARGON RECORDS crew. JAMES, on a whim, emailed the radio show to ask if he could meet up with other like minds. There he would meet the other two members that would form the 3-piece, RED ARMY. Together, they would shortly set dance floors on fire with releases on SKUNKROCK, ARGON, PHUTURO, and eventually, N2O. The N2O deal soured on the crew, and it was beginning to be harder to work in the studio as JAMES relocated to SACRAMENTO, JOAQUIN would move back to SAN DIEGO to begin his film directing career, and JUSTIN would start what is now known as one of the largest electronic groups right now: THE GLITCH MOB. This left JAMES as the soul output for the RED ARMY moniker.

While getting nibbles for releases from a few labels, the years of 2005-2009 saw a hard time on D+B altogether. Labels were switching to digital formats and vinyl was becoming obsolete, folding a great deal of labels, including ones that were planning on new RED ARMY releases. These tunes still have never seen the light of day. In 2009, JAMES got serious again about the production side of the music and slowly started to release again on SIMPLIFY RECORDINGS and ONSET AUDIO, two SEATTLE-based labels which were solely responsible for getting his music back out on the dance floors. Flash forward to the present, RED ARMY is now being released on DUST AUDIO's sister label TURBINE MUSIC (both digitally and some soon to be vinyl releases), GROUND MASS, ONSET AUDIO (responsible for 7 of his current releases) and a slew of support from some of the scene's veterans and up-and-comers like BAIELY, DEXTA, MAUOQ, STUNNA, SPINDALL, HOMEMADE WEAPONS, CLIMA, INTERLINE, GREMLINZ, and REZA, to name a few.

Join us this session as we're treated to an ALL-ORIGINAL production mix from RED ARMY and be sure to pick up his new 'HIGH GRADE' EP which lands this MONDAY, AUGUST 4th courtesy of TURBINE MUSIC. Tune in!!!