'THE GREENROOM' Guest Mix from THE PLATFORM PROJECT - November 16, 2022 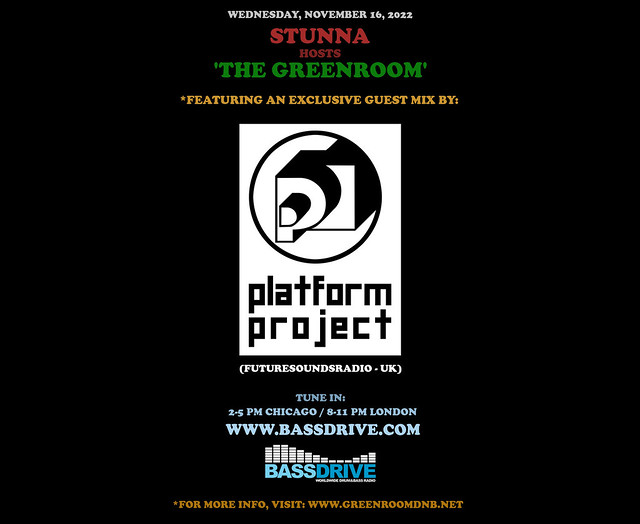 On WEDNESDAY, NOVEMBER 16th, STUNNA presents another special edition of 'THE GREENROOM' on BASSDRIVE Radio. During this week's session, we're treated to an exclusive guest mix from seasoned selector DJ PI from THE PLATFORM PROJECT.

Northern UK-based DJ PI (aka SIMON BLUNDEN) started his journey as a DJ in the late '90s, after falling in love with DRUM+BASS music when he heard LTJ BUKEM's 'LOGICAL PROGRESSION' mix for the first time. That love of the LIQUID/INTELLIGENT side of D+B has never left him. Even now, he still favors productions that have musicality and soul, but he's never shy to mix things up a bit as well.

After becoming a bit jaded by the scene in the late 2010s, he began a project called "SECRET SOUNDCLOUD." It began as a series of 30-minute mixes, around 12 tracks, but all unreleased productions from a multitude of talented, emerging artists, trying to get their music heard. This built a solid following over a couple of years, and he was pleased to be invited by long-time friend JIMMY DARK to join him on BASSPORT.FM with a monthly show. After much thought, they came up with the name THE PLATFORM PROJECT, as it encapsulated the ethos of the show: showcasing the lesser-known, up-and-coming, emerging artists and labels. When BASSPORT.FM closed shop after a five year run, DJ PI was pleased to hook up with SCOTT ALLEN (founder of the venerable imrpint SOUL DEEP RECORDINGS), a former guest on the show, and he suggested DJ PI should contact the crew at FUTURE SOUNDS RADIO.

You can now catch DJ PI on tha airwaves as THE PLATFORM PROJECT presents its 2 hour show from 8pm GMT every last SATURDAY of the month on FUTURESOUNDSRADIO.COM.

Join us this edition as DJ PI from THE PLATFORM PROJECT graces the decks with a special guest set created specificually for this broadcast. Tune in!


*For more information on THE PLATFORM PROJECT, visit: