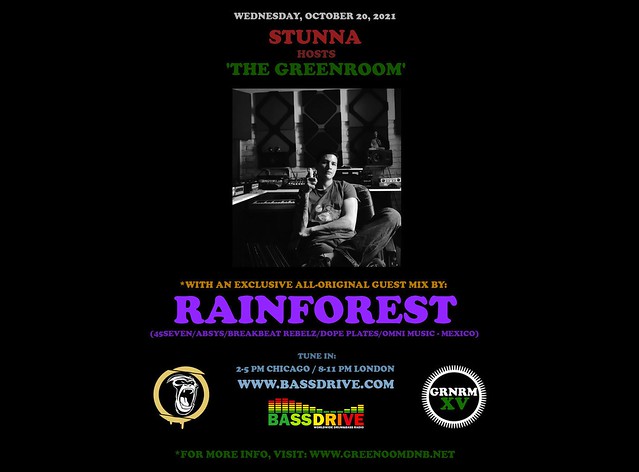 On WEDNESDAY, OCTOBER 20th, STUNNA moves deeper into the month of broadcasts in 'THE GREENROOM' on BASSDRIVE Radio. During this week's session, we're treated to an exclusive, all-original guest mix from talented and versatile producer RAINFOREST, as he makes his debut appearance on the program.

Hailing from MEXICO, RAINFOREST (aka RODRIGO ALVAREZ) is not new to the worldwide JUNGLE/DRUM+BASS scene. Initially starting his DJ career in 2002, he began producing music in 2004, and has since unleashed a flurry of digital releases alongside a number of vinyl offerings, too. Pushing a long range of music aesthetics in every single production, RAINFOREST always mangages to focus on trying to make all his tracks sound a bit different from one another.

With a long list of labels supporting and releasing his music over the years, such as 45SEVEN, ABSYS, DOPE PLATES, MOVEMENTINSOUND, MONOCHROME RECORDINGS, and OMNI MUSIC, RAINFOREST has also found time and energy to launch two labels: BREAKBEAT REBELZ and BACKGROUNDS MUSIC. Both imprints serve as an outlet for RAINFOREST (and other like-minded producers) to explore further experimentations of JUNGLE and HALFTIME sounds. With the recent release of his seventh album, entitled 'THE OCEAN' [BREAKBEAT REBELZ], RAINFOREST continues to successfully move forward with both his sound and craft.

Please join us for 'THE GREENROOM' as RAINFOREST graces the show with an all-original production mix crafted especially for this session. Tune in!

**For more information on RAINFOREST, visit:

*Further links to check out: