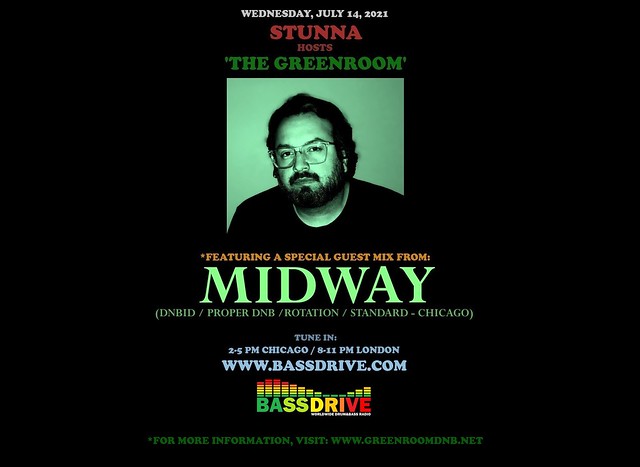 On WEDNESDAY, JULY 14th, STUNNA presents another special installment of 'THE GREENROOM' on BASSDRIVE Radio. In this week's boradcast, STUNNA welcomes fellow CHICAGOAN, producer and DJ MIDWAY to the show for an exclusive guest mix.

Growing up in small town outside of GUADALAJARA, MEXICO and then moving to CHICAGO in the mid 1980s, MIDWAY (aka JUANNE aka JOSE ALVAREZ) was thrown neck deep into an underground audio landscape that was sprawling all over the city. From HOUSE to TECHNO, HIP HOP to EDM, and everything in between, music grasped its hands tightly around him and the neighborhoods of CHICAGO. Having been exposed to such an amazing early electronic dance scene and the parties that followed, MIDWAY not only became a fanatic, but he also knew he wanted to do more with music. In 1995, he started DJing, and the following year, he threw his first warehouse party. In the early 2000s, the underground scene moved into the clubs of CHICAGO's nightlife. MIDWAY found a home at the famed SMARTBAR club and ran a DRUM+BASS night for several years that brought out some of the genre's most brilliant minds and talents. Hosting headliners such as the ViRam crew, LTJ BUKEM, GOLIDE, MARKY, NOISIA, dBridge, and S.P.Y, he curated some of the first LIQUID FUNK nights with the likes of DJ LEE, NU:TONE, and LENZMAN. MIDWAY's hard work over the years has helped the D+B sound to flourish in CHICAGO and laid the groundwork for many of today's promotion crews. Currently hard at work in the studio producing a wide variety of genres (including TECHNO, under his 'JUANNE' moniker), MIDWAY is also an original member of the city's PROPER DNB crew that contiues to bring music to the eager masses on a weekly basis.

Please join us this session as MIDWAY presents a special guest mix featuring some of his favorite tracks doing the rounds worldwide. Tune in!

*For more info on MIDWAY, visit:

• MIDWAY on Soundcloud
• MIDWAY aka JUANNE on Bandcamp