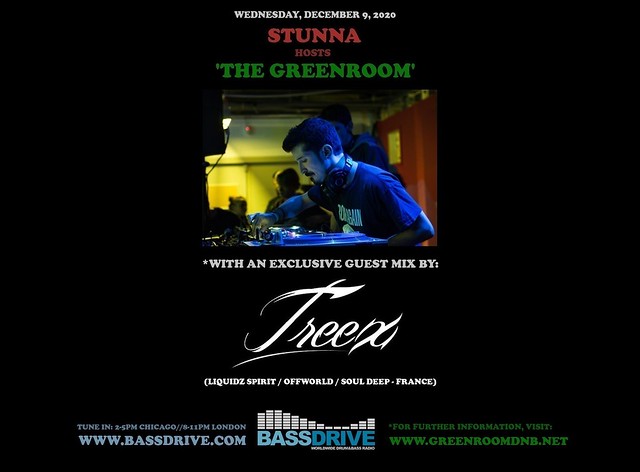 On WEDNESDAY, DECEMBER 9th, STUNNA presents another very special edition of 'THE GREENROOM' on BASSDRIVE Radio. In this broacast, we're treated to a return visit from the PARIS, FRANCE-based DRUM+BASS producer/DJ known as TREEX, as he unveils a brand new guest mix created exclusively for this program.

Born in 1984, and raised in FRANCE, TREEX has been involved in his native country's DRUM+BASS scene for many years. Lending his hand at the organization of events and DJing with his friends from AMPLITUDE, EN2, EXPLORATION, and QUALITY LABS, TREEX threw his hat into the production ring in 2010 and began making tracks. In the time since, he's honed his sound and engineering acumen to pen original works for such labels as SOUL DEEP RECORDINGS, LUV DISASTER RECORDS, TOTAAL REZ, SOUL TRADER, LIQUID BRILLIANTS, and OFFWORLD RECORDINGS. With positive global support of his music from revered names such as TECHNIMATIC, VELOCITY, SCOTT ALLEN, LM1, MACCA, DUOSCIENCE, DJ CHAP, PHAT PLAYAZ, SALARYMAN, LOZ CONTRERAS, MISSFORTUNE, and the rest of the BASSDRIVE crew, watch out for more infectious grooves from TREEX to be revelead as we head into 2021. Also, be sure to check his 'LIQUIDZ SPIRIT' brand of events, podcasts and digital releases that was launched in 2016 and continues to move strength to strength in the D+B world (including the recent release of the "SINGULARITIES" EP, featuring productions from JOAKUIM, DESKAI, INDUKTIV, and TREEX himeslf).

Join us this installment of 'THE GREENROOM' as TREEX presents a new studio mix including some of his favorite tracks doing the global rounds. Tune in!

*For more information on TREEX, visit: