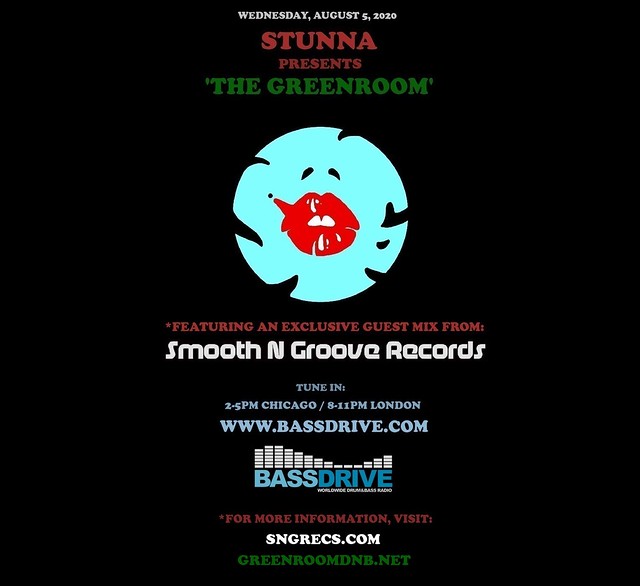 On WEDNESDAY, AUGUST 5th, STUNNA kicks off a brand new month of prorgams in 'THE GREENROOM' on BASSDRIVE Radio. In this week's broadcast, we're treated to a guest mix from a DRUM+BASS label that continues to move strength to strength since its inception over four years ago. SMOOTH N GROOVE RECORDS return to 'THE GREENROOM' for an exclusive guest mix featuring tracks from their imprint and its growing stable of talented artists.

Dedicated to bringing its listeners atmospheric, funky, soulful, and rolling vibes, SMOOTH N GROOVE RECORDS (based out of both WASHINGTON, D.C. and NORTHAMPTON, UK, respectively) was launched in 2016, and within its first four years of activity has released a flurry of stellar music from its top tier group of producers. Recent releases include offerings from PLTX, BRONSKI, WOODTEKR, nCAMARGO, WYMAN, WANTED ID, JazzInspired, VIEWER, SUBSID, mSdoS, as well as the massive, 51-track "HIDDEN IN THE CRATES: VOL 3" compilation. JULY 30th sees the release of the debut album from VIENNA, AUSTIA-based producer CARTER, as he unveils his deep journey 'EARTH' LP for SMOOTH N GROOVE RECORDS.

Please join us for this installment of 'THE GREENROOM' as SMOOTH N GROOVE RECORDS highlight their talented roster's releases, present and future, and showcase why they're one of the most revered DRUM+BASS labels around the globe. Tune in!