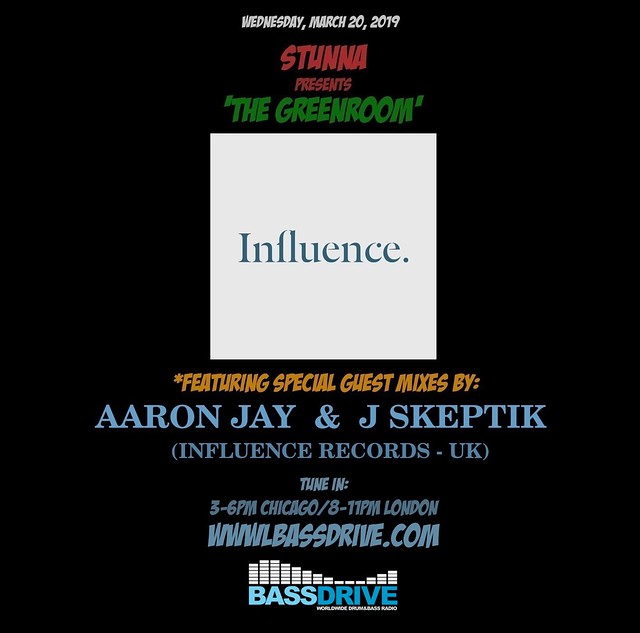 On WEDNESDAY, MARCH 20th, STUNNA unveils an exclusive installment of 'THE GREENROOM' BASSDRIVE radio. In this week's broadcast, we're treated to not one, but two special guest mixes created specifically for the program. AARON JAY and J SKEPTIK, the minds behind revered DRUM+BASS imprint INFLUENCE RECORDS, make their 'GREENROOM' debut, as each drops exclusive sets in support of their label.

Beginning his journey as a DJ in 1997, UK-based AARON JAY quickly earned his stripes as a resident at FABIO's legendary 'SWERVE' night in LONDON in 2002. Performing monthly to dub-hungry punters who like their rhythms both soulful and funky, AARON's arsenal of unsigned tracks soon led him to create his very own label. Founded in 2008, the INFLUENCE RECORDS imprint has pushed the deeper side of DRUM+BASS with a stellar roster of talent including: ATOM, BAL, BROTHER, DATA, DAVE OWEN, DELTA + FORMAT, EASY + GEEKS, EVESON, FLACO, FURNEY, ICR, KJELL, MIXMASTER DOC, MR JOSEPH, RANDOM MOVEMENT, RAW Q, SINISTARR, SOUL INTENT, and SPECIFIC. AARON has also found time to team up in the studio domain with the mighty LYNX (CREATIVE SOURCE, DETAIL, SOULr). Having previously released music on 31 RECORDS, the pair also has forthcoming material on INFLUENCE in the near future.

The year 2015 saw the addition of fellow UK countryman J SKEPTIK to the INFLUENCE RECORDS family as label manager. Beginning his musical path with DRUM+BASS by listening to old tap packs included DREAMSCAPE, HELTER SKELTER, ROAST, and TELEPATHY, then 17-year-old J SKEPTIK got his first set of vinyl decks in 1999 and hasn't looked back since. Having played many cities throughout the UK for brands including HOSPITALITY, ON A MISSION, PARADOX, RIDDM, SOCIAL:BEATZ, and SOUNDCLASH (to name a few), in 2016, J SKEPTIK got his first international booking in AMSTERDAM for the popular CHEEKY MONDAY brand. Playing a broad stroke across the full spectrum of DRUM+BASS music, J SKEPTIK has always had a passion for the more LIQUID, deeper vibes that this music brings.

In 2019, INFLUENCE RECORDS continues to push forward with the deeper D+B spectrum and has releases set to drop from the likes of EASY + GEEKS and SERGIO MANIFESTO. With nearly a dozen years in the label game, AARON JAY will also be putting together an exclusive remix project featuring some very exciting names on board. JULY 27, 2019 marks the first INFLUENCE RECORDS night in LONDON. Aptly named 'INFLUENCED,' the night (and following series) will focus on bringing together some of the best artists in the scene that are currently pushing the deeper, refined sound for which the label has become known. The opening event will feature FABIO, MAKOTO, AARON JAY, SMJ, and J SKEPTIK.

Join us this broadcast as AARON JAY and J SKEPTIK both present guest mixes featuring new and exclusive sounds from the INFLUENCE RECORDS stable, as well as some of their favorite tracks doing the global rounds. Tune in!

**DUE TO DAYLIGHT SAVINGS TIME, listeners in NORTH AMERICA will tune in ONE HOUR LATE than usual for the rest of the month of MARCH (ie: 3-6PM CHICAGO, instead of the usual 2-5PM)