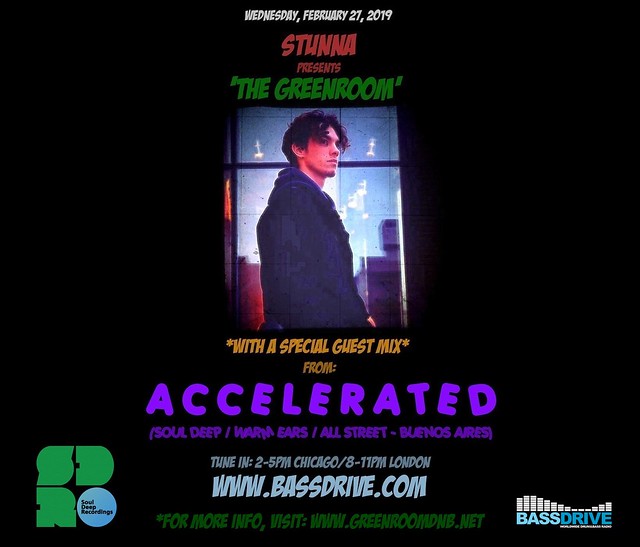 On WEDNESDAY, FEBRUARY 27th, STUNNA closes out another month in 'THE GREENROOM' on BASSDRIVE radio with an installment featuring one of DRUM+BASS music's new talents on the rise. In this session, we're treated to an exclusive guest mix from ACCELERATED.

Hailing from MAR DEL PLATA, BUENOS AIRES, ACCELERATED (aka FERNANDO MARTIN ESTECHE) is a 23 years old LIQUID FUNK producer that began producing in 2017. On his debut 'LOSSLESS LOVE' EP release on SOUL DEEP RECORDINGS, ACCELERATED flexes his burgeoning production skills and expertly balances atmospheric vibes with emotional textures and voices. His sophomore EP release showcases his versatility, combining deep and dark flavors with "ELEVATED" and his remix of "THE LAST TIME." Influenced by talented artists such as SATL, MALAKY, SILENCE GROOVE, PHIL TANGENT, GLXY, R1C0, ILL TRUTH, and CHANGING FACES, ACCELERATED has continued to progress as a producer and is currently working on brand new material. With forthcoming releases slated soon on ALL STREET RECORDINGS and WARM EARS MUSIC, be on the lookout for plenty more quality sounds from ACCELERATED throughout 2019 and beyond.

Join us this session as ACCELERATED presents a guest set created especially for this broadcast. Tune in!


*For more information on ACCELERATED, visit: