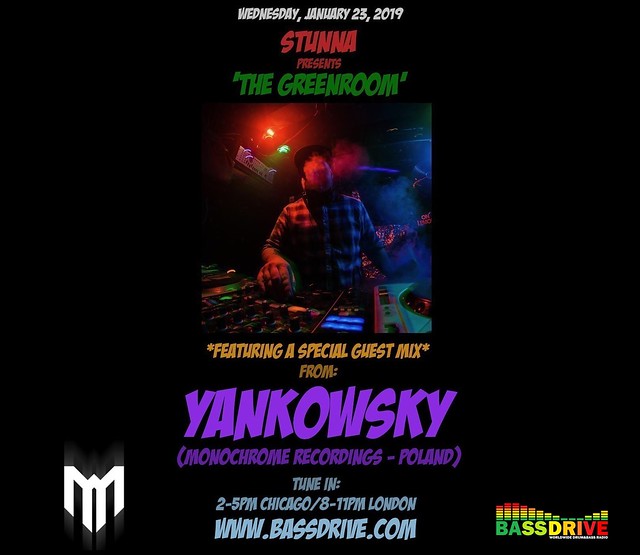 On WEDNESDAY, JANUARY 23, 2019, STUNNA hosts another very special installment of 'THE GREENROOM' on BASSDRIVE Radio. In this broadcast, STUNNA presents the welcome return of MONOCHROME RECORDINGS' label head YANKOWSKY for an exclusive guest mix.

Nearly 4 years since his last appearance on this show, SILESIA, POLAND's very own PIOTREK YANKOWSKY steps forward with another finely-curated mix in support of his and partner in crime PROVOKE RAIN's MONOCHROME RECORDINGS imprint. An avid follower of the atmospheric, Drumfunk flavors of DRUM+BASS music, YANKOWSKY has immersed himself into the cult of the AMEN Break, Artcore and Golden Era Jungle vibes. Many of these flavors can be heard in the growing catalogue of the MONOCHROME RECORDINGS label, which recently released the massive 'ABANDONED PLANET: VOL 3' various artists album. Featuring the talents of such producers as ABSTRACT DRUMZ, KYAM, VINCE ROLLIN, SKRU, and DRUM CYPHA, 'AB3' showcases the imprint's diverse, forward thinking sound with roots firmly planted in OLD SCHOOL JUNGLE's aesthetic.

With plenty more label projects dropping throughout 2019 and beyond, MONOCHROME RECORDINGS's YANKOWSKY unleashes a set of music especially crafted for this broadcast. Please join us for a peek inside YANKOWSKY eclectic music collection including some of his favorite tracks doing the rounds worldwide. Tune in!


*For more information on YANKOWSKY, visit: