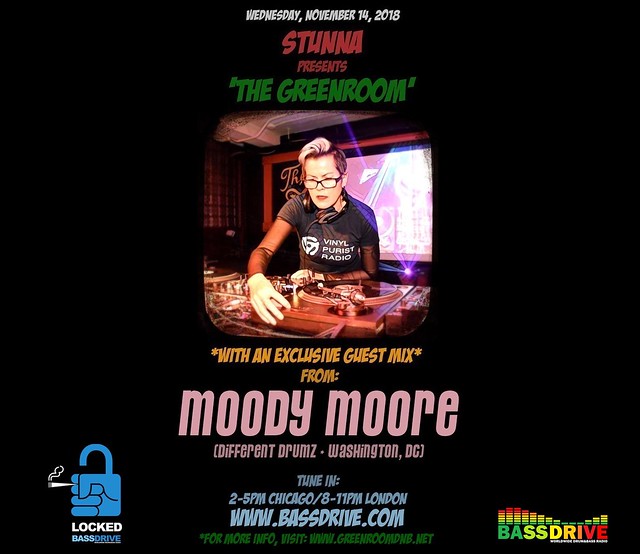 On WEDNESDAY, NOVEMBER 14, 2018, STUNNA presents another very special edition of 'THE GREENROOM' on BASSDRIVE Radio. In this broadcast, we turn our attention to the very talented MOODY MOORE and welcome her as she presents an exclusive guest mix for the show.

A bona fide DRUM+BASS music veteran, MOODY MOORE is a well-known fixture in the WASHINGTON, D.C. D+B scene. Originally hailing from COLORADO, MOODY began her life as a DJ eighteen years ago. Within the first year of her career, her talents graced the decks at illustrious East Coast clubs like NATION and SONAR. Moe recently, she's performed at D.C.'s U STREET MUSIC HALL and FLASH. She's opened club nights alongside THE CRYSTAL METHOD, DJ RAP, PENDULUM, LENZMAN, ALIX PEREZ, and many more. She's a regular on the summer festival circuit and has played at 'BURNING MAN' in NEVADA and 'STARSCAPE' in BALTIMORE.

In the 2000s, MOODY formed the BANSHEEZ (the first all-female DRUM+BASS crew in D.C.). Alongside DJs INNA K, SKANDALUS, SYLKEY, and JUNGLE JESSI, MOODY and the collective smashed crowds at raves, clubs, house parties, and much more. During this period, MOODY's talents were regularly on display at ALCHEMY/A.L.I.A.S. at NATION almost every week. She won multiple DJ contests at NATION, establishing herself quickly as a serious fixture in D.C. DRUM+BASS. Most of the BANSHEEZ still DJ regularly to this day.

In the mid-2000s, MOODY moved to CALIFORNIA and promoted and played numerous events in LOS ANGELES and SAN DIEGO.

Currently, MOODY is proud to announce the release of her own website: www.MOODYMOORE.com. The mobile-friendly site showcases her latest gigs, mixes, blogs, and images from MOODY's DJing exploits around the globe. You can also catch her on the airwaves hosting the 'ATTITUDE ADJUSTMENT' radio show. Broadcasting monthly on the DIFFERENTDRUMZ site, her program features the amazing talent in the D.C. metro area as well as spotlighting producers and DJs worldwide.

Join us this session as MOODY MOORE presents an exclusive guest mix featuring some of her favorite new and unreleased tracks doing the rounds. Tune in!!