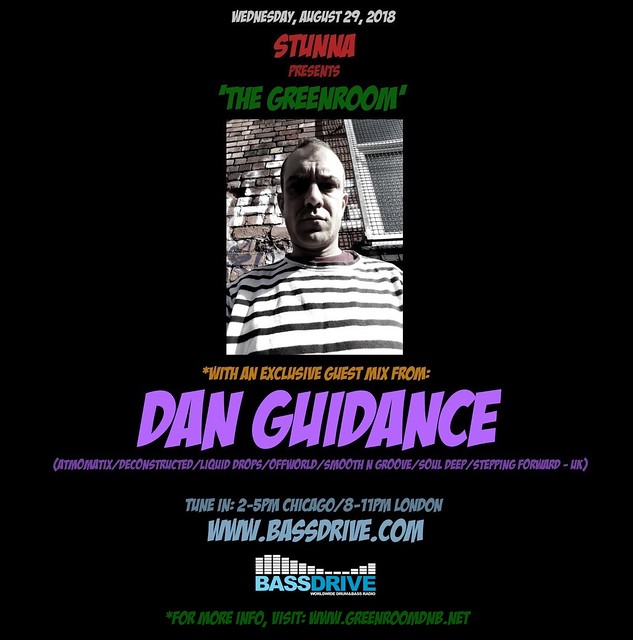 Closing out another exciting month of 'THE GREENROOM' on BASSDRIVE Radio, on WEDNESDAY, AUGUST 29th, STUNNA unveils an exclusive guest mix from the talented producer and DJ known as DAN GUIDANCE.

Mainly associated with the atmospheric LIQUID side of DRUM + BASS music, BRISTOL, UK-based artist DAN GUIDANCE (aka DAN GUY) takes his musical influences from all over the spectrum, and it definitely shows in his productions. Seamlessly blending the sounds of JAZZ, DUB, SKA, TECHNO, HOUSE and WORLD music, DAN's DRUM + BASS tracks are an amalgamation of a life spent appreciating and studying various forms of music across the globe.

Beginning his musical journey DJing in the mid '90s by working his way through most EDM genres, DAN eventually progressed to making his own tunes. Starting on basic software like EJay, REBIRTH, and ACID, he then advanced to ABLETON LIVE, which is his current DAW of choice. With his first DRUM + BASS release in 2011 (in form of the pensive, 'INTROSPECTION' EP on POINT AUDIO), DAN has had a successful past 7 years with releases on numerous esteemed labels such as TECHNIQUE, FLEX, and SOUL DEEP RECORDINGS.

Spreading his wings a bit to incorporate different flavors into his productions, DAN has worked with other artists, including vocalists IDENTIFIED, LADY EMZ, and HIP HOP outfits MAJOR TRIADZ and THE INEXPLICABLES. Adding to his growing catalogue of D+B productions, DAN has teamed up with other like-minded artists such as ARCH ORIGIN, FISHY, MARVEL CINEMA, T BASE, ZEN DUB, and has had his tracks remixed by the likes of FUNKWARE, SEATHASKY, and ZERO T.

With a string of original tracks and collaborations set to drop later this year and well into 2019, DAN's main focus in the future is perfecting his live set alongside fine tuning his production skills.

Join us this session as we're treated to a special guest mix from DAN GUIDANCE as he presents a set created exclusively for this broadcast. Tune in!!