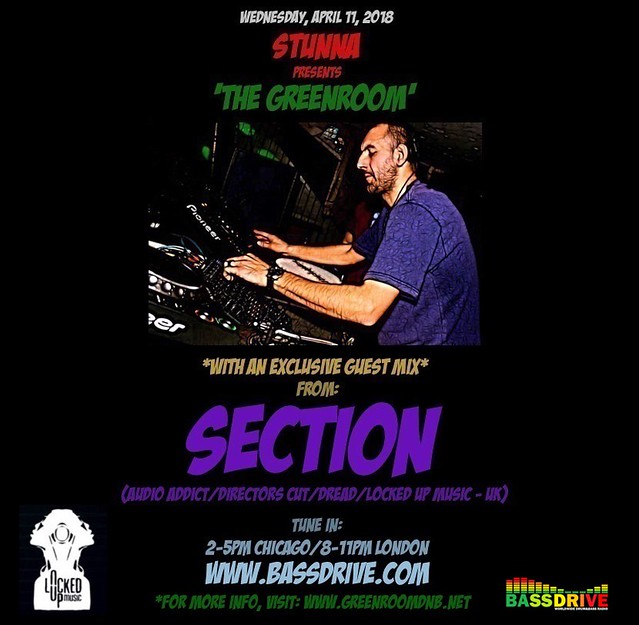 On WEDNESDAY, APRIL 11, 2018, STUNNA presents another special edition of 'THE GREENROOM' on BASSDRIVE Radio. In this week's installment, we're treated to an exclusive guest mix from exciting DRUM+BASS production outfit SECTION.

Formed in 2013 by producer friends JAY B and SOLLEY, SECTION's history in the scene dates back well over 20 years. The like-minded pair of DJ/producers combined forces to create music strictly aimed at damaging dance floors with its old school roots polished with today's slick production techniques. An impressive catalogue of their work can be found on revered labels such as DREAD, SKELETON, SERIAL KILLAZ, NATTY DUB, DIRECTORS CUT and AUDIO ADDICT. In 2017, the duo launched their own LOCKED UP MUSIC imprint as an avenue to release their own tracks as well as collaborations with the likes of JAYBEE, MARCUS TEE, OPIUS, IKON B, AGRO, MENTAH, and VERDIKT. With strong global support of the label from scene heavyweights DOC SCOTT, BAILEY, RONI SIZE, HYPE, GROOVERIDER, RAY KEITH, KENNY KEN, SERIAL KILLAZ and DJ VAPOUR, APRIL 12th sees the worldwide release on LOCKED UP MUSIC from SECTION teamed up with the highly acclaimed producer KUMARACHI, as they drop their highly anticipated 'START A FIRE' EP. Also, be on the lookout soon for the debut EP from SR, LOCKED UP MUSIC's first various artist album this summer, as well as the label's first vinyl offering coming early next year.

Lock in for this broadcast as JAY B from SECTION unveils a deadly guest mix featuring many offerings from the LOCKED UP MUSIC camp, as well as some of his personal favorite productions currently doing the rounds. Tune in!


*For more information on SECTION, visit:

**For more information on LOCKED UP MUSIC, visit: