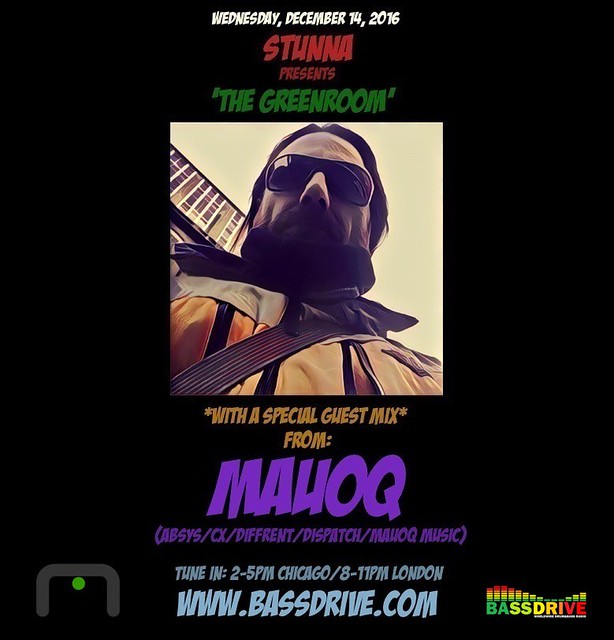 STUNNA dives deeper into the tail end of 2016 with a very special installment of 'THE GREENROOM' on BASSDRIVE Radio. In the December 14th program, we're treated to an exclusive guest mix from a seasoned producer and DJ known as MAUOQ.

Originally from ROME, ITALY, MAUOQ (aka MAURO CAMPANA) began his electronic music journey by playing ITALO-HOUSE and TECHNO at student parties in the early 1990's. Enamored by the bass-rich BREAKBEAT sound emerging from the UK mid-decade, MAUOQ immersed himself in the deepest and grooviest side of the DRUM+BASS spectrum. At the beginning of the new millennium, MAUOQ eventually moved to LONDON, the epicenter of a burgeoning and exciting scene.

Exposed to the upfront sounds of DUBSTEP a few years later, MAUOQ focused on this new genre's dub-tinged elements and this eventually redefined his D+B taste, too, for a 'less is more' approach to his own studio productions. In 2010, MAUOQ established a bi-monthly podcast series. Aimed at showcasing the most recent and interesting facets of an ever-evolving, bass-driven electronic music genre, the 'MAUOQ DNB PODCAST' has become a popular hub for fans of cutting-edge sounds.

The year 2015 saw the re-launch of MAUOQ's own MAUOQ MUSIC imprint, a label originally established to release his own material, remixes and collaborations. He's also seen releases on an array of revered labels such as DIFFRENT MUSIC, ABSYS RECORDS, DISPATCH RECORDINGS, and CX DIGITAL. With strong worldwide support of his productions from the likes of SKEPTICAL, MARK SYSTEM, TOKYO PROSE, and LOXY, MAUOQ continues to carve his own unique path in the fast-paced DRUM+BASS arena.

Join us this session as MAUOQ treats listeners with a unique blend of forthcoming tracks and his own creations. Tune in!!

**For more information on MAUOQ, visit: