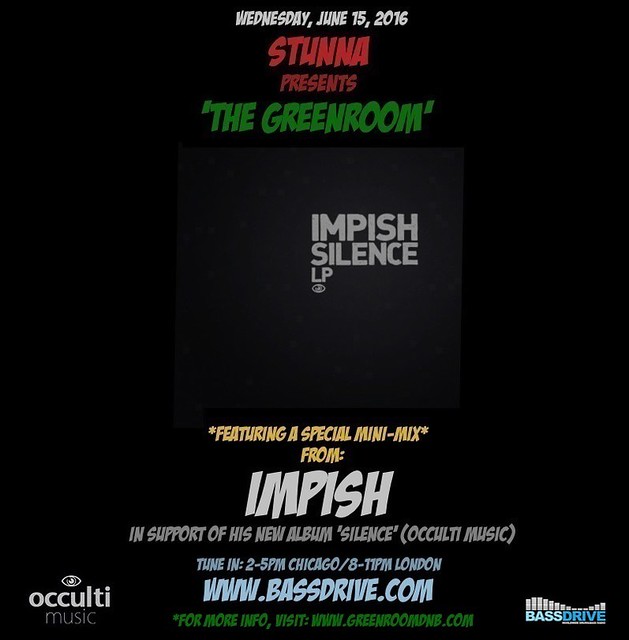 On WEDNESDAY, JUNE 15, 2016, STUNNA kicks off the Summer season with a very special edition of 'THE GREENROOM' on BASSDRIVE Radio. In this week's episode, we're treated to a short, but sweet guest mix from IMPISH in support of his brand new album "SILENCE" which sees its imminent release on OCCULTI MUSIC.

Expertly juggling roles as a DRUM+BASS producer, instrumentalist, engineer, promoter and graphic designer, MOSCOW, RUSSIA-based IMPISH has built a steady following worldwide. With a number of stellar releases on imprints such as FOKUZ, CITRUS, and BLENDITS, he's received support by heavyweights LTJ BUKEM, TECHNIMATIC, SPECTRASOUL, BTK, JOHN B, and countless more. For his most recent project, the "SILENCE" LP, IMPISH follows up his 2014 full length debut "UNDERWATER" LP in which he combined forces with seasoned vocalist VASILISA. The "SILENCE" LP continues his work with the talented singer and also sees collaborations with exciting producers META, SOLIGEN and TYPE 2. Preceded by two vinyl samplers (the first is available to order now), the action-packed 11-track album will see its full release as a digital download package courtesy of the OCCULTI MUSIC imprint.

Tune in this week as IMPISH previews cuts from his sophomore album in a tightly-wrapped mini-mix created exclusively for this session. Tune in!!!