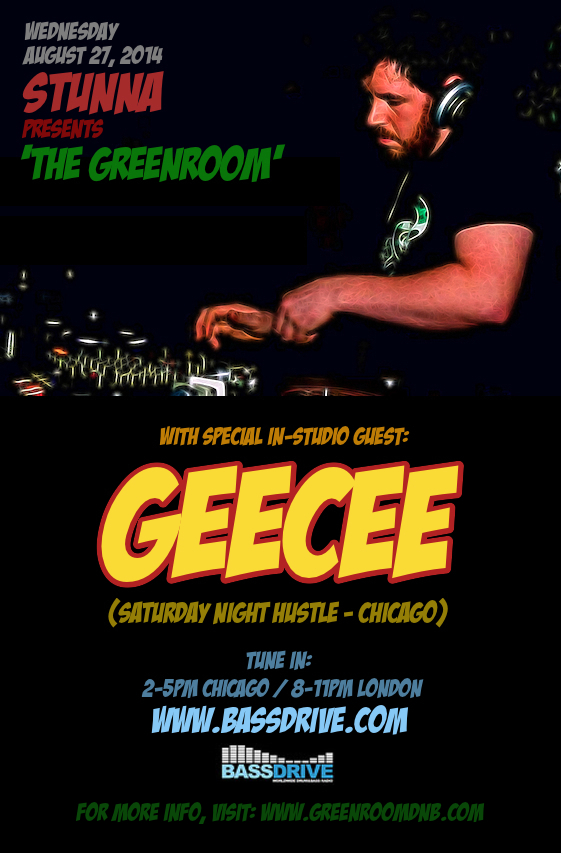 On WEDNESDAY, AUGUST 27, 2014, STUNNA closes out the month with yet another special installment of 'THE GREENROOM' on BASSDRIVE radio. In this edition, he welcomes fellow long-time CHICAGO DJ GEECEE into the studio for an exclusive guest mix.

GEECEE (aka JEREMY WATSON) began DJing after being exposed to DRUM+BASS music in the late 90′s. After honing his craft at home, he was rewarded with his first residency at Club SHATTERED in COLUMBIA, MISSOURI. With the help of a few others, the TUESDAY night weekly “SYNKRONIZE” ran for 2+ years, ending in the summer of 2002. GC went on to hold residencies at a handful of other establishments, also in COLUMBIA. Throughout the years from 2000 on, he maintained his residencies and played consistently around the MIDWEST, always taking the crowd for a ride with his noted deep, energetic, storytelling sets. He started working on production in 2004 and has been breaking beats ever since. In early 2007, JEREMY moved to CHICAGO after the infamous 'BLACK BABY' fiasco. He was quickly accepted as a staple in the WINDY CITY BASS music scene, and played every major D+B club night before the end of the year. Being around so many like-minded individuals, he was motivated to throw shows again, this time helping to start the CHICAGO chapter of the famed KONKRETE JUNGLE organization based out of NEW YORK CITY. With a home base of the storied CAFE LURA, GC helped bring quality DRUM+BASS to large groups of heads. Fast forward to 2011: with his first record seeing a release on ST. LOUIS imprint UNITOVONE RECORDINGS with close friend and fellow producer BORJA, GC has been in the studio daily, putting in work. Presently, be sure to keep an ear out for more original productions from this talented DJ/producer of DRUM+BASS and beyond.

Tune in this session and join us as GEECEE drops an exclusive live set!

**For more information on GEECEE, visit: