'THE GREENROOM' Feature Mix on ROMANIA and its Producers: October 23, 2013 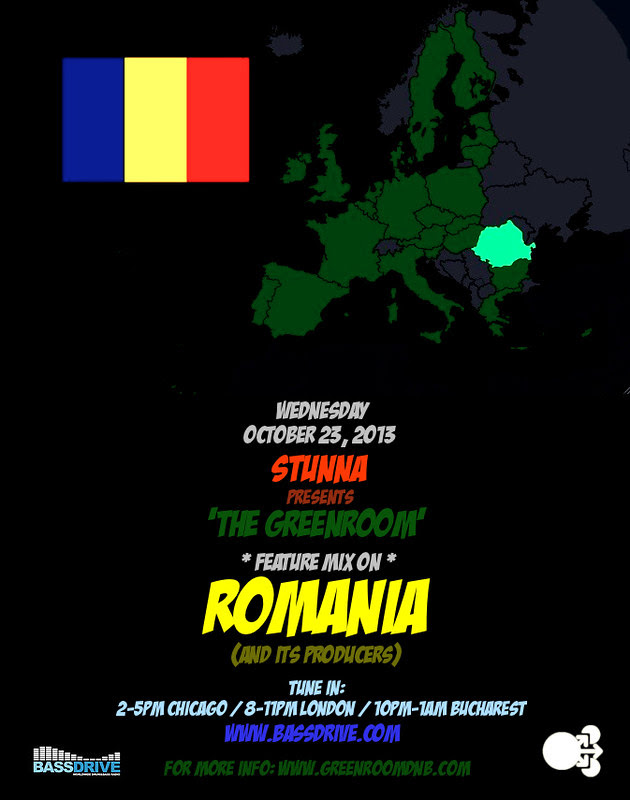 On WEDNESDAY, OCTOBER 23, 2013, STUNNA presents a truly special installment of 'THE GREENROOM.' In this edition, a first of its kind, instead of focusing our attention upon one specific producer or label, we'll be featuring the music of an entire country. It's 'THE GREENROOM' feature mix on the great nation of ROMANIA and its producers.

Although many of us are well aware of the genre's history and respect the UNITED KINGDOM as the birthplace of DRUM+BASS nearly 25 years ago, the music and its culture have been far-reaching globally and influenced countless countries enamored with the sound. One of those places is ROMANIA and, over the years, it has borne many a great producer and DJ of DRUM+BASS music.

If you've tuned into any broadcast of "THE GREENROOM' the past few years, you may have already become acquainted with a number of the ROMANIAN producers included in this week's special. Three hours in a program dedicated to focus on a vast number of talented producers definitely only chips at the proverbial 'iceberg' of the wealth and amount of music from these artists, but hopefully you'll familiarize yourselves with some new names and seek their body of work even further after the feature mix.

We'll being going deep into the sounds of DUBKRAFT RECORDS' ALIEN PIMP (who alongside RUSSIA's DATACODE, is also one half of production unit MARGINAL); discovering the world of production mind ARCHER; visiting the versatile BEEPO (who also records as FUTURE SELF alongside JTR); becoming acquainted with the talents of DAN HABARNAM; experiencing the uplifting vibes of DUBMUNK; meeting the production force known as DUDAWLES; diving into the subaquatic soundscapes of DYL; unveiling the twisted sounds of FANE; taking a journey through the smoother edges of MENTAL CHEMISTRY; and coming face to face with the one known as MIGHTY BOOGIE.

Massive respect to all the producers, DJs, MCs, labels, promoters, and music supporters from ROMANIA. Enjoy the show!!


**For more information on some of ROMANIA's producers, visit: