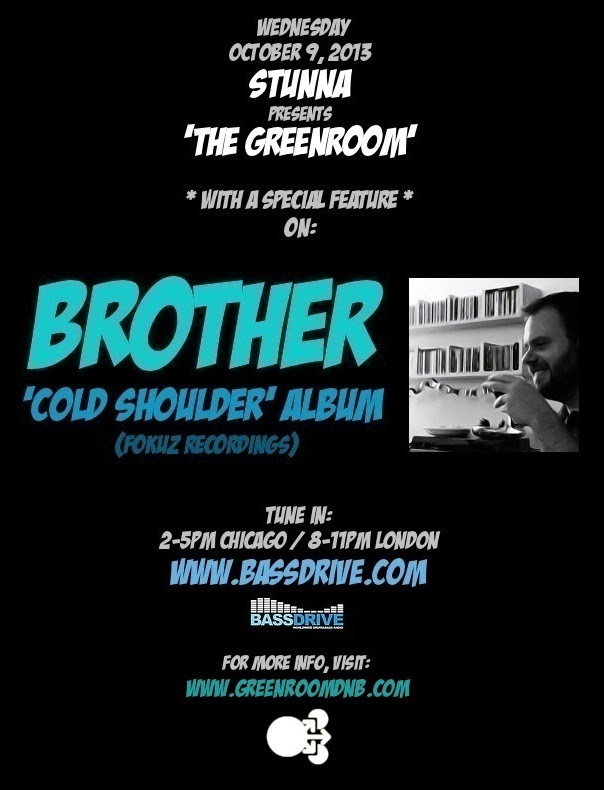 On WEDNESDAY, OCTOBER 9, 2013, STUNNA hosts yet another very special edition 'THE GREENROOM.' In this installment, we turn our attention towards one of DRUM+BASS music's finest producers on the scene today: BROTHER.

Although UK-based BROTHER (aka PAUL DONALD) has released a number of stellar original tracks and remixes in recent times, it's actually been four years since the delivery of his debut album 'HIDDEN DEPTHS' on FOKUZ RECORDINGS in 2009. Autumn 2013 sees the release of his follow-up LP for FOKUZ entitled 'COLD SHOULDER.' The new album is a sprawling trip, winding its way through D+B on one CD, then heading into the deeper waters of HOUSE music on a second disc, all the while keeping an intelligent and refined vibe intact throughout the journey.

Tune in this week as STUNNA presents an exclusive mix featuring tracks from the 'COLD SHOULDER' LP as well as music from the 'HIDDEN DEPTHS' LP, various singles, and a few unreleased original tracks and collaborations to illustrate the many talents and facets of the one called BROTHER.


**For more information on a BROTHER, visit: