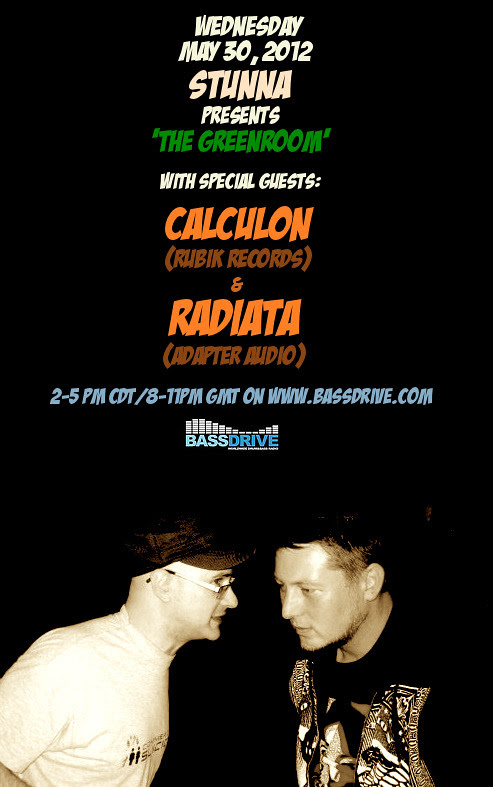 On WEDNESDAY, MAY 30, 2012, STUNNA presents a very special edition of 'THE GREENROOM,' welcoming into the studio two major players in the forefront of the AMERICAN DRUM+BASS movement.

SAN DIEGO-based producer, DJ and main man behind the RUBIK RECORDS imprint: CALCULON makes his triumphant return to the BASSDRIVE airwaves. In addition to maintaining RUBIK's busy release schedule (including the global launch of HEAVY1's 'MINIMALIZED' album), CALCULON's own recent productions have been garnering attention, praise and signings from labels such as GOOD LOOKING, PHUZION, HUMAN ELEMENTS, FOKUZ, LEVITATED, THINK DEEP, and BIG RIDDIM. It's been a few years since he's made a visit to 'THE GREENROOM' so I'm happy to have him back as he makes a CHICAGO stop during his current Midwest tour.

Also joining me in the studio is CHICAGO-based producer, DJ and head of the burgeoning ADAPTER AUDIO label: RADIATA. Having recently bestowed 'THE GREENROOM' with an exclusive mix of strictly his own productions, RADIATA has remained busy behind the scenes both creating a new batch of music as well as culling and curating tracks for his ADAPTER AUDIO imprint (with its most current release having just dropped online courtesy of BRAZILIAN duo JAM THIEVES in form of 'CONCRETE JUNGLE' feat. VOICE MC b/w 'DEAD WRONG'). Fast-becoming a regular guest in the friendly confines of 'THE GREENROOM,' I'm pleased to have this seasoned DJ thru again for what's sure to be another memorable and lively set.