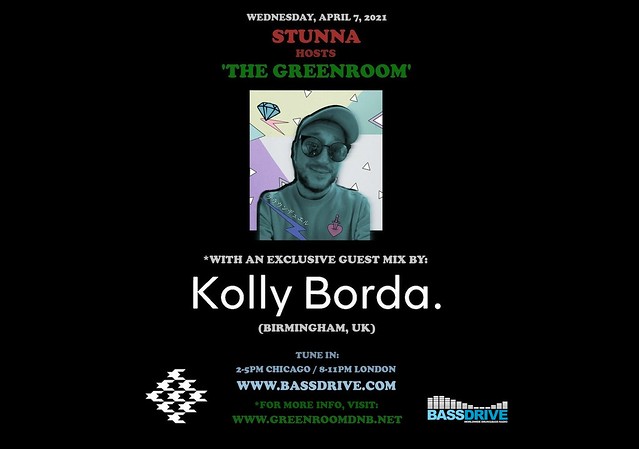 On WEDNESDAY, APRIL 7th, STUNNA kicks off a brand new months of broadcasts in 'THE GREENROOM' on BASSDRIVE Radio. In this week's edition, STUNNA welcomes budding producer and DJ on -the-rise KOLLY BORDA, as he makes his debut appearance on the program.

BIRMINGHAM, UK-based KOLLY BORDA is a brand new project for 2021 from the mastermind behind the CROWN DUELS moniker. Venturing into the DRUM+BASS community with his new take on the genre, KOLLY BORDA infuses UK GARAGE-style influences alongside soulful vocals to create his own unique sound. With a lifetime of music exposure, including a concentraion on DIGITAL MUSIC studies at SOUTHAMPTON's SOLENT UNIVERSITY, KOLLY BORDA's musical journey has led him around the globe, with performances throughout CHINA, EUROPE, and BBC RADIO support under his CROWN DUELS alias. Shortly following his breakthrough success as CROWN DUELS, he curated his own independent record label BEAR FRESH, which has made an indelible mark on the UK BASS scene to this day.  Accepting that his musical tastebuds have steered him in different directions over the past few years, CROWN DUELS is sad to see this musical chapter come to an end, however, the journey for KOLLY BORDA has only just begun.

Join us for this session of 'THE GREENROOM' as KOLLY BORDA unveils a special guest mix featuring new and exclusive tracks fresh out of the studio. Tune in!