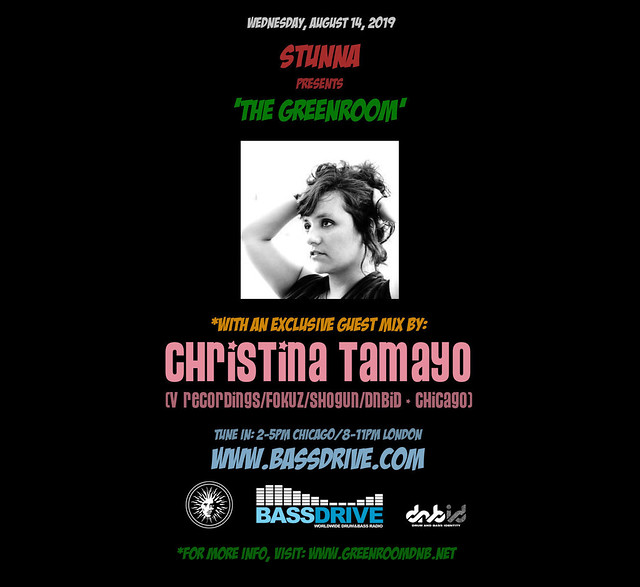 On WEDNESDAY, AUGUST 14, 2019, STUNNA presents another special edition of 'THE GREENROOM' on BASSDRIVE radio. In this week's broadcast, we're honored to air the debut 'GREENROOM' guest mix from one of DRUM+BASS music's finest talents: DJ and vocalist CHRISTINA TAMAYO aka CHRISSY TEE.

Hailing from CHICAGO, ILLINOIS' southside, CHRISTINA TAMAYO has emerged as a staple in the AMERICAN DRUM+BASS scene the past few years. With releases on seminal UK labels V RECORDINGS, LIQUID V, SHOGUN AUDIO, GOOD LOOKING RECORDS, RUBIK, and FOKUZ, TAMAYO stands out with her deep and airy vocals, sharp songwriting abilities, stylistic versatility, and prowess behind the decks.

Raised on R&B hits and the prominent sounds of CHICAGO HOUSE MUSIC in the '90s, she later found her niche in the soulful realms of electronic music. Now, as a respected singer and DJ, TAMAYO uses CHICAGO as her home base to gig and collaborate with like-minded producers in HOUSE, HIP HOP, and DRUM+BASS.

She is never one to shy away from new realms and genres, from the more soulful to the minimal, gritty and beyond. With every collaboration, her palate and appreciation for music expands, gaining knowledge from the greats of yore, as well as those to come.

Tracks featuring TAMAYO have seen heavy support from scene luminaries such as FABIO, FRICTION, JOHN B, LTJ BUKEM, and BRYAN GEE, as well as airplay on BBC RADIO 1 and RED BULL MUSIC ACADEMY RADIO. Be on the lookout for more quality music from TAMAYO as she unleashes one soulful release at a time.

Join us this session as CHRISTINA TAMAYO presents a special mix including some of her favorite tracks doing the global rounds. Tune in!

*For more info on CHRISTINA TAMAYO aka CHRISS TEE, visit: